CTV's The Listener: Back For Season Four 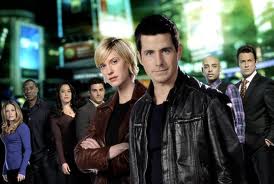 "I never thought we'd hit a second season," Craig Olejnik, star of CTV's The Listener is saying on the phone.
"But here we are talking about the fourth season. There's a story there, really."
The Listener's fourth season revs up Wednesday May 29 at 10 p.m. and indeed it's a surprise given the disastrous premiere year.
The series about a telepathic paramedical Toby (Olejnik) took a direct hit with unfavorable critical reviews and outright rejection by NBC which ran the Toronto-made series five times before pushing the cancellation button.
"The comments were hurtful," admits Olejnik. "I haven't read any since then."
CTV persevered in showing the entire first year but Olejnik says he was "as surprised as anyone" when the order for a second season came through.
The second season took forever to come together and when filming commenced the basic narrative thread had been changed.
"We started off as a serial and were now a procedural. I think that saved the show."
Season Three offered its own surprise: the show finally started registering with audiences notching average audiences of 1.2 million viewers a week. There had been constant growth ever since its debut but only with Season Three could The Listener be termed a bona fide hit.
"Finally!" laughs Olejnik. CTV stuck with the show and so did Shaftesbury Films's cagey executive producer Christina Jennings who refused to panic after the initial whiff of very bad news.
Previewing the first new episode is a lesson in plot reconstruction. The team are off to Vancouver on an assignment --a costly trip for any series.
"Actually only exteriors were shot in Vancouver," says Olejnik's co-star Lauren Lee Smith. "The rest was done in Toronto and it's very seamless."
What emerges is a great, tension filled chase saga as the team must race against the clock to prevent a brilliant but mad young student from blowing up the center of the city.
By now Olejnik has settled down to give a compact, precise turn and he's ably paired with Lauren Lee Smith as Sgt, Michelle McCluskey as head of the RCMP's Integrated Investigative Bureau.
"I joined in season two," she tells me. "It's the hardest TV series I've been on, 13-hour days are the norm compared with eight hours I'd spend on CSI."
For the 2003 season Smith co-starred on CSI and compares the experience as "on CSI I had a small role and I'd sometimes have to wait for hours to do my scene of the day.
Yes, it's a well oiled machine, the second unit does a lot of the work. But you can't argue with success, yes, there's a formula but done to the hilt.
"On Listener I'm in many of the big scenes, the days are longer. But it's for 13 episodes not the 22 on CSI.  But on CSI I'd get a charge just driving to Universal studios every day."
Olejnik was only 14 when he planed his breakout role opposite Helena Bonham Carter in the film Margaret's Museum made in Nova Scotia.
"I just aced the audition, I was exactly what they wanted and it made me realize this was where I could be. But there were hard times afterward when I had to go back to high school and I left for a bit and lived with Ken Welsh and his family. I did return to finish high school and then moved to Vancouver."
The story is true that originally Listener producers felt Olejnik's piercing blue eyes were too blue and thought maybe he should wear contacts --these days those blue eyes are one of the show's talking points among fans.
Smith had her own trajectory on her way to The Listener.
In 2005 at the start of her career she co-starred in the explicit fil romance Lie With Me acing the part of a blue collar worker and she followed with fine work in the TV drama The L Word ( 2004-06).
"I became familiar with controversy early on," she laughs. But just as compelling was the CBC series Intelligence (2006) before she hit the mainstream with CBS's CSI in 2008.
Olejnik, 33,  says his four seasons on Listener "has been an amazing education how the business operates.  It's been my university. One day it seems I was playing beach volleyball in Vancouver with a young unknown named Erik Karpluk and now she's guesting on the series I'm starring in. Amazing."
Smith , 32, who made three movies this year in her hiatus says working 13 episodes a year "gives me the space to do other projects.  It's certainly not as fatiguing as working on  22 episodes a season."
"I think with Listener we're now hitting our stride. There's excitement we might get an order for a fifth season"
Adds Olejnik. "I didn't think a second season was possible and now I'm hoping for a fifth. In one way I liked not knowing--it makes us all work better."
THE FOURTH SEASON OF THE LISTENER PREMIERES ON CTV WEDNESDAY MAY 29 AT 10 P.M.
MY RATING: ***1/2.