When the DVD previews of the new TV version of Father Brown arrived I elected to take a pass.
It was a horribly bad call I'm ready to admit. 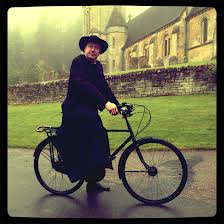 First of all I'd loved the original TV series made in 1976 starring film fave Kenneth More and I just couldn't see Mark williams in the lead.
Then there was the disconcerting news the stories had been updated to the Fifties and firmly situated at Kembleford in the Cotswolds.
Weren't the original stories set all over the place?
But curiosity finally got the better of me and I plopped in the first two episodes.
And I'm now admitting to making a big mistake. Father Brown is rather fun of its kind and William aces the character as far as I'm concerned.
Up first is a juicy tale of sexual shenanigans and murder. called The Hammer  Of God. Well, it's as juicy as could be allowed back in the Fifties.
This English village as an all white enclave where the only differences allowed are between the Catholic Father Brown and his Anglican counterpart.
There's a cute celebration to mark the instillation at the Anglican church of a new bell ringing device.
And at the subsequent tea party what should happen but a rather violent murder: the local bad boy gets his head bashed in by an anvil borrowed from the village smitty.
Williams' Brown is sheer delight. He's a very nosey parker indeed  and one who delights in the pleasures of this life including nibbling on the award winning strawberry scones and chattering away to the well dressed ladies in attendance.
Pitted against this comical figure is the suitably dour Inspector Valentine (Hugo Speer) who must doggedly run through all the suspects, the motives, the means of murder.
It doesn't help that the blacksmith's perky wife Elizabeth has already made a false confession because she believes her husband did it.
And added are the regulars: the luxurantly dressed Lady Felicia (Nancy Carroll),  the gossipy church secretary Mrs. McCarthy (Sorcha Cusack) and the hard working Polish refugee turned housekeeper Susie (Kasia Koleczek).
The mystery gets solved in a suitable leisurely fashion --there was no CSI in those days, of course.
Father Brown is a luxuriant exercise in Fifties revivalism. The cars look spotless, the village is graffiti free, the little shoips spin and span. Who wouldn't want to live there?
Everybody knows everybody else --the mayhem committed here is ever so gently applied. Even the killer has a point or two about him.
Father Brown, simply stated, hasn't enough to do, he's forever interfering in everybody else's business.
People who enjoy all those Agatha Christie remakes will willingly watch Father Brown.
There's a certain feeling of safeness here. Those who seem to be suspect are one by one ruled out.
The murder weapon is unusual. The setting by a babbling brook is perfect.
And at the end everybody gathers for one more great tea party. What fun!
By my count there are seven more new episodes to run over the next month and a half.
I know I'll be watching. You should try this one out, too.
FATHER BROWN RUNS ON BBC CANADA Thursdays At 8 P.M.
MY RATING: ***1/2.

We have read the books,we have seen two german versions,Alec Guiness and Kenneth Moore.Our conclusion: This is the most true to the spiritual character of Father Brown (as in the books), as they come.
The writing is also "in the spirit/and values of G.K.Chesterton's books....