The Nature Of Inspiration: Inspiring 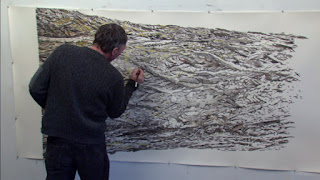 "A vast wasteland."
Remember when American TV was so described by Federal Communications Commissioner Newton Minow?
These days the phrase could equally describe Canadian TV which has become a vast wasteland of imported American shlock where quality Canadian programs are few and far between.
And then along comes the sparkling new hour special The Nature Of Inspiration which is so well made it gives me some hope all is not lost with that most Canadian of creations, the quality TV documentary.
The premise is simplicity itself: director Ian Toews got to spend quality time with a fine group of Canadian artists who are inspired by the great Canadian landscape around them.
They are: David Alexander (painter), Dempsey Bob (Carver), Edward Burtynsky (photographer), John Chalke (ceramics), Marlene Creates (mixed media), Aganetha Dyk (sculptor), Takao Tanabe (painter), Peter von Tiesenhausen (mixed media), Robert Wiens (sculptor).
Shot in batches over a period of six years this one is must see viewing because it reaffirms the importance of the Canadian landscape in the hearts and minds of our most prominent artists.
The hour really works for me and some of the artists are well known, others significantly under the radar.
Outside of Canada there's a tremendous segment about photographer Burtynsky journeying to Chile to photograph the awesome Chuquicamata mine where the art of extraction mining creates a scary landscape that might be more suited to moon launches.
For Wiens it's all about the trees as he paints life sized versions both swe inspiring and filled with minutae of brush strokes.
John Chalke makes pottery from the clay formations he discovers which are transformed into flowing works of pottery.
Aganetha Dyck uses Manitoba honey bees as co-artists in her sculpture --the bees obligingly provide the wax for articles she presents inside their hives.
Feisty Takao Tanabe, 86, paints awesome landscapes that he humorously adds that if you've seen one of his landscapes you've seen them all.
For David Alexander inspiration comes from B.C.'s Purcell mountains. For Marlene Creates it's the combination of her poetry and her photography. For Dempsey Bob it's the creation of stark wooden masks that he says at some point take over and dictate the final form.
For Pieter von Tiesenhausen it's unity with the world around you that is the touch stone of art.
Toews tells me he first interviewed the artists for his 51-episode Bravo series Landscape As Muse. Scenes originally shot in 16 millimeter were transferred to HD. The Interview scenes are all new except for Tanabe's segment.
"Revisiting them was a pleasure but we still had a lot to talk about," says Toews.  "We had kept in touch and coming together again was a real pleasure because they're still at it."
Basically Toews is showing that the very essence of Canada forms the basic inspiration for the artists to interpret their surroundings.
In normal times The Nature Of Inspiration would get a pride of place showing on the Nature Of Things. But these are not normal times and CBC is desperately fighting for ratings. First casualty has been high art programming.
Still, it's encouraging The Nature Of Inspiration is on CBC Documentary and in a fallow month where the competition seems mainly to consist of wall-to-wall American repeats.
For Toews it's an important time as he prepares to move his boutique film making 291 Film Company from Regina to B.C. because the provincial Conservative government is canceling tax shelter programs which fund regional film making.
"They'll fund construction companies but not the arts, it's their peculiar political philosophy."
Toews should thrive wherever he works but for Saskatchewan it will be a real loss of prestige not easily regained..
THE NATURE OF INSPIRATION PREMIERES ON CBC DOCUMENTARY ON SAT. AUG. 4 AT 6 P.M.
MY RATING: ****.