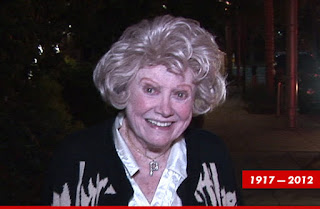 So there I was with a gaggle of TV columnists at Hollywood's famous Comedy Store up on the Sunset Strip.
It was exactly 20 years ago --July 1992 --and we'd all been invited to join in the festivities of celebrating Phyllis Diller's 75th birthday party.
That's the only time I met the legendary Diller and I discovered up close and personal what a fine person she was.
The joint was packed and Diller was in great form as she took to the stage and began unleashing her trademarked one liners.
But then there was a disturbance near the door. A horribly dressed old woman had stomped in and was making her way to the stage.
Everybody froze until Diller took a second look at this feisty senior citizen.
Who was it? Milton Berle in drag that's who!
Diller was convulsed with laughter and Uncle Miltie did his shtick. And that was so very pleasant about her --she loved it when other comics got laughs too!
The repartee between Diller and Berle was among the funniest moments I've ever watched. And afterwards I got to interview Diller, too, who was a pioneering female comic.
Was there anybody before her, I innocently asked.
"Sure, Martha Raye, Joan Davis, Lucy Ball, they were all what I call physicals. My style was stand up and that was hard to get into."
She'd been born Phyllis Driver in Lima, Peru in 1917. She studied piano for three years and in 1939, aged 22, married the perpetually unemployed Sherwood Diller. They had five children and Diller toiled as an advertising copywriter to make ends meet.
"See, I always thought I was funny and I finally started doing comedy clubs. Jack Paar was the first to use me on TV in 1959 but I'd already been a contestant on Groucho Marx's You Bet Your Life."
Soon she was a staple on TV variety hours with her raucous laughter and dead pan delivery.
"I was the mystery guest on What's My Line and they guessed me after three questions. It was my voice that gave me away."
Bob Hope became a prized mentor and Diller was a frequent guest on his specials and in such movies as Boy Did I Get A Wrong Number (1968) and Eight On The Lam (1967).
"But you see Bob was the star and I wound up feeding him one liners."
TV series stardom eluded her. When I mentioned her 1966 series The Pruitts Of Southampton she dismissed it as a "real dog".
"You see I could act, really, look up the movie The Adding Machine (1969). I do not play the Phyllis character there."
In recent years Diller battled health issues. after a 1999 heart attack she was fitted with a pacemaker and had it replaced in 2005. She supposedly retired from stand up but as recently as last year was interviewed on both Anderson Cooper and Rosie O'Donnell's TV series.
I really liked her that night when she ceded center stage to aged Milton Berle and later was seen escorting him to his limousine. Phyllis Diller proved to be both immensely talented and very nice.