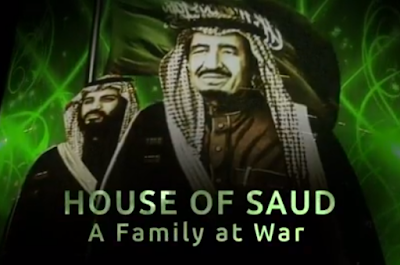 The brilliant new BBC-TV documentary series House Of Saud answers each and every question you may ever have had about that troubled Middle East kingdom.
You can catch the first hour Tuesday at 9 on TVOntario. Next Tuesday there's the second hour with the finale on Tuesday April 15. Got that?
It is an astonishing project and one that is compulsively viewable.
And it all starts not in Saudi Arabia but in a small, isolated village in Bosnia --we can see torn flags of jihadists-and we come to understand the impact of the Saudi wealth and political ambition.
For the rebels in Bosnia were funded by Saudi money.
And 17 of the 19 perpetrators of 8/11 were Saudis.
And the caliphate in Syria was nourished by Saudi support.
So we can see the importance of director Michael Rudin's three-hour masterpiece which has no dull spots at all.
And, remarkably,  Rudin was refused permission to film inside the kingdom --all the people he interviews lived elsewhere.
And the scissors and pastiche recreation of events is so well done I can't think of any advantage of actually going to Mecca.
Rudin's film explains brilliantly the close contact between the Saudi family and supporters of the conservative Islamic traditions known as "Wahhabism".
The newsreel clips show U.S. Presidents Bush, Obama and Trump all doing due diligence in reinforcing ties to the kingdom --the ties seem to be fraying badly especially in Syria.
Rgere are great shots of arms being unloaded in the dark in Jordan to be transported across the border to rebel groups in Syria.
Episode Three is, I think, the best of all, an absorbing portrait of Saudi Crown Prince Mohammed bin Salman.
We've already seen how his crackdowns on corruption have even affected family members.
Or are these measures merely a way of extending his power and eliminating potential.
This hour looks at the excesses of the royal family particularly in London.
His social reforms include allowing women for the first time to drive cars.
But the number of state executions of political dissidents is way up.
And the Saudis are accused of using all the modern software techniques to trap potenrtial opponents --half the country's Twitter accounts are controlled in some by by the state sewcutity agency.
Some British critics have charged this series whiewashed the royal family.
I felt differently --there is the charge the Saudis saw weaknesses in the Syrian regime and tried to exploit that --Syria's regime  is allied with the Saudi enemy Iran and both side have been pumping arms into the conflict.
Ithink the term is "nuanced". Bin Salman can only go so far and his passion for French chateaux and the better things in life might mean he covets the wealth of his relatives.
With oil prices slipping the kingdom may be in for tough days ahead and the younger generations seem thirsty for major changes the royal family may not be able to grant.
All in all here is one of the best documentaries of the TV year and certainly must-see TV.
THE HOUSE OF SAUD'S NORTH AMERICAN PREMIERE IS ON TVONTARIO TUESDAY MAY 1 AT 9 P.M. FOLLOWED BY EPISODES ON MAY 8 AND MAY 15.
MY RATING: ****.
Posted by james bawden at 8:12 PM