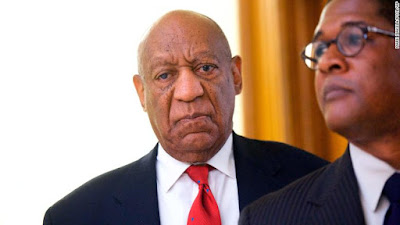 I'm not sure how many times I interviewed Bill Cosbu.
Remember in the 1980s he was riding high as America's biggest and best TV dad.
I was certainly around when a nervous Cosby net the TV critics in Los Angeles for the first time as star of The Cosby Show.
The jokes that day were all about parenthood and how he was going to play a middle class doctor  Cliff Huxtable who just happened to be black.
He certainly seemed sweet that day and in top form in repartee. I remember he kept kidding Ann Hodges from the Houston paper who was sitting next to me  for her thick Texan brawl.
But nobody knew if he could actually bring it off.
His last series was a NBC variety series and it had flopped big time.
That day Cosby said he was going to shoot the series in New York which was one difference. He'd hand picked his cast including Phylicia Rashad and he wanted genuine family problems to be encountered.
The rest is history.
The Cosby Show saved NBC from a downward spiral in the ratings.
It made Cosby very big in TV circles and he soon spun off another series A Different World.
He'd created the show with the best of talent including Canadian writer Earl Pomerantz.
Attending the tapings were wonderful to behold --so smoothy created and filled with genuine talent.
Cos got honorary degrees all over the place and even finished a PhD on his own.
When I interviewed Robert Culp during the same press tour Culp was filled with praise his I Spy co-star telling me " Bill Cosby has it all."
And now?
Well, Cosby has been ruined --any idea of a comeback for the disgraced 80-year old comic seems totally impossible.
And here's the question people ask me: "What happened?"
One clue, I think. came with the roadside murder of his beloved son Ennis Crosby.
Ennis was shot in the head by an 18-year old in a failed robbery attempt --.
It was in the early hours of January 16,1997, that young Cosby pulled off California;s Interstate 405 and while attempting to fix a tire was shot in the head.
The outpuring of support from friends was massive but I believe Cosby was never the same again.
This was his tipping point.
It, of course, does not excuse his outrageous behavior in the least.
And several people have asked why Cosby would drug these women when he coul;d have picxked up paid escorts anytime.
In the same time frame Tom Brokaw of NBC has been accused of inappropriate behavior but many of the women he worked with at the network have come to his defence.
And TVO's Styeve Paikin has been cleared asfter accusations of inappropriate behavior.
We live in a New World Order but I'm still wondering why Cosby did all this and did he think with his huge pop status he was above the law?
a
Posted by james bawden at 11:05 PM