Into The Fire Burns With Intensity 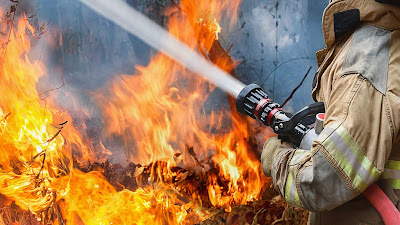 When I spotted the name Leora Eisen I just knew I'd be watching her brilliant new documentary Into The Fire which premieres on CBC-TV's The Nature Of Things Sunday November 5 at 8 p.m.
Over the years I've admired such TV productions from this talented director including Beauty Quest (2005) and Think Like An Animal (2016).
I guess the last one I caught was a beautifully modulated docu-biography of her deep relationship with her identical twin sister Linda: Two Of A Kind.
Her latest documentary (for 90th Parallel Productions) is , well, literally on fire.
It follows in the wake of the devastation of a whole Canadian city: Fort McMurray.
And I was just on the phone with friends who've moved to Bellingham, Washington who notice the smog in the air caused by gigantic wild fires in British Columbia.
"I'd started the research and then the B.C. wildfires raged. There had been Fort McMurray --an entire city of 90,000 evacuated.
"I also wanted to hook into the people who spend their lives studying fires," Eisen says ". And there are a lot of them out there.
"The fires are getting bigger. It's important to understand the science. I was told each rise in temperature of just 1 degree means a 12 per cent increase in lightning."
Eisen got her big break making mini-documentaries for CTV's Canada AM and here she's able to squeeze into 44 minutes a whole heck a lot of information without making the story seem hurried.
Now that's a real advantage--you can't turn away from it for a minute.
And she also has the knack of interviewing the fire watchers who emerge not so much as strange but really dedicated to their rare craft.
And Eisen can relate to a shared fear of fire --she was 21 and living in a high rise when a fire broke out  and she had to struggle to get down the staircase with smoke burning her eyes.
You'll be fascinated by wildfire expert Mike Flannigan who explains how one spark can ignite a gigantic forest fire.
Says Eisen: "In some cases a huge amount of rain in the spring will cause grasses to grow and grow and later during hot summer these can explode into huge fires."
Consultant Alan Westhaver takes us on a tour of burned out blocks of Fort McMurray.
Some houses have burned into nothingness yet right next door a perfectly preserved home sits intact.
Houses that resist fire might have features like a non-flammable roof or vegetation in the backyard less prone to ignition.
Eisen was on location with scientists and firefighters as they carry out a "test burn" on a living room.
"I know it sounds strange,"Eisen tells me "but modern homes are far more inflammable than a house built a century ago."
I like the philosophy of  veteran fire fighter Josh Johnston that we have to respect the ferocity of fire and work much better as this planet continues to warm up.
And I think IntoThe Fire would be of interest to American TV viewers suffering through dozens of uncontrollable California fires and Australian viewers concerned about the ferocity of fires on their parched continent.
INTO THE FIRE PREMIERES ON CBC-TV's THE NATURE OF THINGS SUNDAY OCTOBER 5 AT 8 P.M.
MY RATING: ****.