Beyond The Spectrum Is Must-See TV 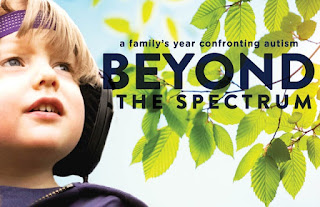 It's the sheer honesty and deep commitment of two parents that should immediately strike you when watching the brilliant new TVOntario documentary Beyond The Spectrum: A Family's Year Confronting Autism.
The 86-minute production premieres on TVOntario Wednesday Oct. 18 at 9 p.m. and is must-see TV at its best.
Canadian director Steven Suderman is telling me the committed parents contacted him rather than the usual way and after listening to their story he thought it might make a riveting TV documentary. He was right on that point.
"And I had a history with TVOntario," he says over the phone. In 2011 Suderman directed and produced  the film To Make A Farm for TVO and won awards for that one.
The resulting film premieres during Autism Aware Month which is entirely appropriate.
First off we are made aware of these very remarkable parents Carly and Stef and their realization that when Oskar is 2 he is diagnosed with autism.
They decide to drop everything else to care for their son for a year to try and give him a head start and make sure he won't get too far behind.
Suderman also was the cameraman on his production and he shot and shot and he's so good at what he does the parents and the other children in the family soon became basically unaware of the camera's presence.
Suderman tells me he never knew what would happen but he wanted to obtain a complete record of this amazing struggle.
We see the anxious parents consulting experts and feeling that what they're being offered may sometimes be contradictory.
So, in effect, they take charge of Oskar's treatment.
For a long time they try various diets --that same philosophy worked when treating an older son who has emerged as a talkative and inquisitive young boy.
"I think we show the couple experienced good days and some not as good," Suderman sayIs. ""The supplements had worked so much better with the other boy."
We also see how all this attention on Oskar affects the other children and how they become vastly supportive to helping their youngest brother.
The approach Suderman uses goes all the way back to Allan King's masterful documentary A Married Couple. Close observation draws the viewer in and we begin rooting for this family.
It worked then and it works here. Under Suderland's masterful direction we get drawn into the struggles of this couple and recognize how far they are determined to go in helping their son.
A few"experts" are plopped in to explain the progress or lack thereof. But basically this is one family's story.
We get to understand why Oskar wants to continually jump in the same place, what frightens him, how he can finally make eye contact with his mother.
These little victories become dramatically compelling.
But at one point the parents ask Suderman to stop filming which he did for almost three months.
There are reasons for this which I can't reveal here but had he not finally be invited back there would only have been half a film.
"They just needed some space," explains director Suderman.
We watch how this family celebrates Christmas --these scenes are dramatically very satisfying.
"Carly had been through this twice," Suderman is telling me."Her patience is amazing as she finds  it's nothing the same as with the older boy."
I think the saddest moment comes when the parents ask "How are we going to cope with this?"
But cope they do. And survive. And grow as parents.
Suderman captures all these highs and lows in such a fashion it's impossible to turn away from his compelling family portrait.
There's also a free interactive app titled My Autism Passport (M.A.P.).
Suderman made it for Merit Motion Pictures and Orangeville Road Pictures.
BEYOND THE SPECTRUM PREMIERES ON TVONTARIO WEDNESDAY OCTOBER 18 AT 9 P.M. and MIDNIGHT WITH REPEAT SHOWINGS ON OCTOBER 21 (9 P.M. AND 1:30 A.M.) AND OCTOBER 22 (8 P.M. AND 1 A.M.