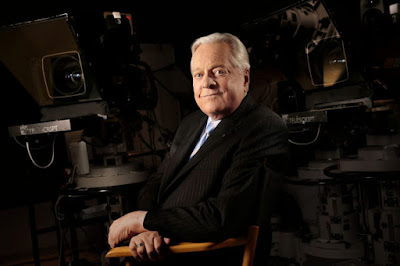 The first time I met Robert Osborne it was 1993 and the genial old movie host was giving interviews at the annual launch for AMC (American Movie Classics).
That's what I said AMC!
Turns out Osborne never did officially join that old movie channel but instead accepted a better bid to become the night time host of TCM ( Turner Classsic Movies).
And for a decade after Osborne joined me in a bid to force the Canadian Radio-television Commission to allow this great haven of film classics to be admitted to the Canadian cablde TV dial.
I remember one CRTC bureaucrat actually telling me TCM was ineligible because there was no Canadian content.
So I got to talk to Osborne on the phone all that time and later when TCM finally hit Canadian TV.
The most important fact: Osborne never did directly program the films shown daily.
"That's a job in itself," he told me. "But there is a lot of give and take. And when I get the lists I get to work researching all films I'll introduce."
When I first met him he'd recently caused some controversy but stating it was TCM's mission to show Congo Maisie as much as it was to show Gone With The Wind."
"Every movie tells us a lot about the times and the people involved in the filming. I guess GWTW is the most shown movie on TCM. But Congo Maisie deserves our attention, too."
AMC was there first and showed the collections of Paramount, Universal, RKO and 20th Century-Fox."
That left Turner with Warners, MGM and RKO (shared with AMC). TCM recently Columbia pictures were added. And now MCA (Paramount and Universal) has also joined.
These days TCM is the last major movie channel around using hosts.
In Canada we had the energetic Elwy Yost in TVOntario for over 20 years. But these days TVO is out of the movie business entirely.
Most people did not know that while Osborne lived in Manhattan he had to fly to TCM headquarters in Atlanta to tape his introductions.
"I started in Hollywood under contract to Lucille Ball as part of a company of aspiring young actors. Lucy trained us in workshops, gave us bit parts in our shows, then told me I should be behind the lights. It was the best career advice ever given to me."
He lived in an apartment in New York called The Osborne. "But it was not named after me! Honest!"
For the past few days TCM has been rerunning all his hour interviews with the likes of Betty Hutton, Debbie Reynolds and Norman Jewison.
In 2011 Osborne was off camera for months recovering from a serious illness and when he returned young Ben Mankiewicz was spelling him off more and more.
Osborne chuckled when I told him Canadian viewers were often perplexed by his introductions. Recently he'd introduced "Claude Rains in a Hitchcockian romance."
Instead Rains appeared in Saturday's Children and not Notorious as Osborne had obviously been publicizing.
"In Canada we have to change seven per cent of titles which we do not own," he admitted. "I dearly wish they'd change the intro, too."
And I'm missing him already.