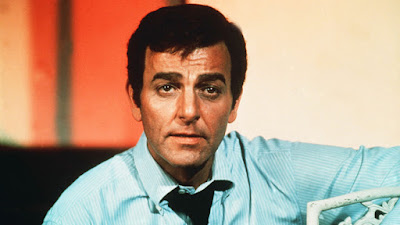 It was my first day ever in Los Angeles as a TV critic, June 10, 1971 to be exact and the CBS publicist had a grueling schedule set out for me.
"We'll start on the set of Mission: Impossible," CBS's Betty Lamm told me. "Then I hand you over to Paramount for lunch on the set of The Brady Bunch. At 1 p.m. I'll pick you up again and we'll go to the L.A. Aquarium where Mannix is filming."
I enjoyed all three encounters but high on my list of best ever interviews was the warm and friendly Mikle Connors.
Mannix ran on CBS for eight huge seasons (1967-1995) and what a surprise it was to find Connors such a delightfully unpretentious guy.
Gail Fisher who played his secretary said to me: "What you see is what you get. No star tantrums. He lines up at the chuck wagon for lunch with the rest of us."
"The show is a hit because of Lucy Ball," Mannix told me. "She signed the personal cheque for $1 million for the pilot because she had a hunch about the show.
"And when initial ratings were disappointing she personally went to the president of CBS and got him to keep us going. It caught on gradually and by season's end we had a hit."
It was Connors who insisted on Fisher for co-star.
"At that time black co-stars were frowned on by CBS which had a huge rural audience. I insisted she be shown in beautifully tailored suits and freshly coiffed and whole episodes were built around her."
I also spent time with the series' creator Bruce Geller who tragically died in a plane crash.
By the way Connors' best buddy was Peter Graves who I'd interviewed that morning on the set of Mission: Impossible --Graves subsequently phoned Connors to alert him and said "Give that kid a break!"
Connors was born Kreker J. Ohanian in Fresno California in 1925. He played basketball at UCLA where he was nicknamed "Touch".
"I played as Touch Connors in the Joan Crawford film Sudden Fear  (1952) and boy what a star she was. The sets had to be frigid because she perspired profusely. By the time she got through with co-star Jack Palance I'm sure he really wanted to kill her!"
Connors had already made as series titled Tightrope for CBS in 1959-69 which he told me "was just average fare. In Mannix my input into every episode is appreciated and we have big guest stars as well."
Connors said he thought the success of the series "can be explained easily. Most TV detectives were seedy up to that time. Joe Mannix was well off, nicely dressed. He sometimes got emotionally involved in the problems of his clients."
For a time Connors also flourished on the big screen.
"I made one mistake and that was to co-star opposite Bette Davis and Susan Hayward in Where Love Has Gone (1964).  These two loathed each other. After Bette's last big scene she took off her white wig and threw it at Susie and it bounced off her forehead. 'Disgusing old bitch!' shouted Susie to the cheers of the crew!"
I remember Connors joking to me that day "When I go to the annual CBS affiliates' meeting I always joke with Jack Lord (of Hawaii 5-0) about who has the best pompadour. I think it's me!"
I kept in touch with Connors and even visited him on his next series Today's FBI  which lasted half a season in 1981.
In later years Connors guested on The Love Boat (1981), War And Remembrance (1989) and on the series Hercules (1998).
I last talked to him on the phone about five years ago and he joked he'd just attended a Hollywood Collectibles Auction.
"So I guess that now makes me a genuine antique."