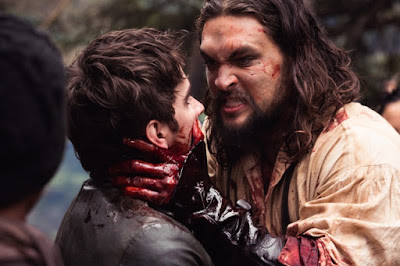 I remember in my august history classes at the University of Toronto we were always taught what a peaceable kingdom Canada was --and is.
But all that gets dispelled with merry abandonment in the rollicking new six-part series from Allan Hawco titled Frontier and currently running on Discovery Sunday nights at 9.
The scripted series has already been renewed for a second season and the premiere attracted almost 600,000 hearty Canadian viewers which is a new high for a cable drama.
And in an unique programming partnership Frontier will soon be seen on Netflix as well.
For me this one is a guilty pleasure just as much fun as Reign.
Characters snarl at each other, brawl, kill with glee and the scenery is threatening in all its savage beauty.
Filming of the second season is now underway in St,. John's (Newfoundland), Cape Breton Island and Cornwall (U.K.).
Starring are Landon Linoiron (Hemlock Grove), Alun  Armstrong (Braveheart), Zoe Boyle (Downton Abbey), Allan Hawco (Republic Of Doyle), Jessica Matten (Red Girl's Reasoning), Shawn Doyle (House Ofd Cards).
The saga is the fur trade and the early days of the Hudson's Bay Fur Trading Company.
Does anybody out there remember the terrible 1941 Hollywood saga with  Paul Muni as Radisson? If you don't you're truly lucky it was that awful.
Declan Harp (Momoa) is the Irish-native outlaw who trying to wrest control of the lucrative trade.
Lord Benton (Alun Armstrong) must travel to the frontier of James Bay to try and teach this upstart a lesson.
A stoway on his voyage Michael Smyth (Landon Liboiron) is conned into getting close with Harp and help Lord Benton's side.
Then there's Samuel Grant (Shawn Doyle) who wants to get in on the lucrative business.
The Blackie brothers have created a rollicking saga and like Reign it might be too historically correct but it sure is fun.
And those of you with very long memories swill recall a CBC series from 1958 titled Radisson --the last time I lcontacted at the CBC archives I was told no copiers exist at all!