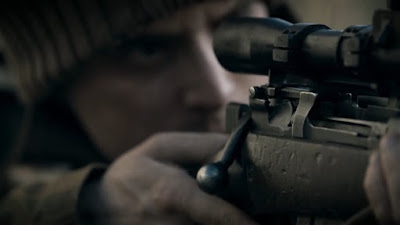 The best way to observe Remembrance Day ? Reserve time to watch the brilliant new documentary Black Watch Snipers which premieres Friday night at 9 on History.
Look, I thought I knew a fair bit about Canada's role in World War II But Black Watch Snipers opens up a whole new perspective.
It's a docudrama finely directed by Robin Bicknell (for Yap Films) that profiles four young Canadians from Montreal's Black Watch regiment who operated behind German lines.
The four survivors interviewed here are Jimmy Bennett, Jim"Hook" Wilkinson, Russell "Sandy" Sanderson and Mike Brunner.
"They were very young men then," Bicknell says. "And now they are very aged, at the ends of their lives. And the stories just came pouring out, Many of these harrowing details they had never even told to their families."
The story has texture and substance through their shared experiences of working under a charismatic leader --Ontario's Dale Sharpe and I'm not giving anything away by saying he died in battle aged just 27.
Says Bicknell :"His family never knew much of this story, they never knew his truly heroic characteristics. He led his men brilliantly."
Certainly the most heart wrenching moment comes when his son comes to the simple graveyard in Holland and begins talking to the dead father he barely knew.
"That just came out," Bicknell says. "And it tried everything together, the young father who died heroically, his son now old himself.
And he had never been there--perhaps he felt it would be too much. But it becomes a sort of tieing up of the story."
Over 5,000 Canadians served in the Black Watch but time has taken most of them and less than 20 are still alive.
"We ended up traveling across Canada and interviewing just eight survivors. We use four of these stories here --we may do another film on the others."
The four she chose were all fast friends back then and have stayed in touch at reunions.
"Their memories were so strong. They could describe every minute of their heroic encounters. They operated behind the German lines collecting information on troop movements and causing disruption."
And here's where this film becomes particularly important although in a macabre way.
"We got to two of them just in time. Two have died --Sanderson and Wilkinson. This is their bequest  because they tell a story few know anything about."
Because so much of the work of the snipers was done undercover very little actual footage exists.
Bicknell brilliantly uses dramatic recreations  shot at Elora, Ontario  with actors and period weapons and uniforms to show the utter confusion of these battles.
In one true scene a large number of German soldiers were rounded up and captured by just one Canadian sniper who pretended to have other Canadians hidden in the nearby woods.
"In one new scene I bring them together except Bennett who could not fly and we took them to a rifle range and their sharp shooting was still completely accurate!
"In some Dutch towns I found old people who were children when the Canadians liberated them and it's a touching moment because they can recall every thing vividly. It's an example of living history jumping out at you."
BLACK WATCH SNIPERS PREMIERES ON HISTORY FRIDAY NOVEMBER 11 AT 9 P.M.
MY RATING ****.
An hour earlier comes an equally fascinating new documentary War Story in which veterans of conflicts in Korea, Afghanistan, Bosnia and Vietnam talk to each other and director Barry Stevens and find they have the same problems despite different distances from their wars.