My Millennial Life: TV Worth Catching 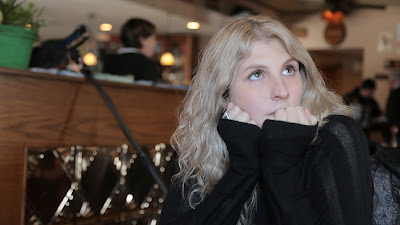 For TV viewers May is often the cruelest month.
The big networks end their seasons and veer into a long, hot summer of reruns.
Which mean you have absolutely no excuses for missing the new documentary directed by Maureen Judge titled My Millennial Life.
The powerful yet compassionate production premieres on TVOntario Saturday May 28 at 9 p.m.
The notes say Judge was reading about the plight of millennials in Europe and wondered if the same situation exists here in Canada.
The thesis is deceptively simple: the most educated generation in history are leaving college and university saddled with huge debts but unable to find meaningful work.
Judge's film follows five millennials who are very talented and bright but who are stuck on the margins of society working as unpaid interns or making beds in a hotel.
Their parents hopes and aspirations --get a good job, have a nice house, retire with a sustainable pension--are seemingly beyond expectations.
The funny and sweet Meron Gaudet,20,  originally an adopted baby from Haiti, is 20 and toils as a maid in an upscale hotel.
From the Maritimes, ultra cool Tim Saulnier, 25, has a rock band but must pay the bills by editing court transcripts.
Emily Smillie, 24, has her kind father paying the bills while she hunts for work.
Hope Kumor, 25, the sole American profiled, is back home with her parents in Philadelphia and still sleeping in her little girls' bed with the chintzy canopy.
James Slifierz, 25, left school to develop his own tech start-up but acknowledges it will be a long slog until he becomes solvent.
Judge has chosen well. She bonds with these kids who are sweet and ironical --they don't understand what is going on but how could they?
All have talent and drive, no slackers here.
But  current trends  in society are working against them and gradually they are coming to know this.
What Judge has done so brilliantly is provide snapshots of their current lives.
I think it's amazing not a singe one seems depressed or angry --they simply keep on working at odd jobs in the hope that big break is around the corner.
Hope has interned at such magazines as Good Housekeeping and clearly has skiils.
But the magazine industry is in steep decline these days and .coms are not making much money at all.
Such lines as "I'll slowly acquire a mass of debt"" speak of their downward spiraling situations.
Tim tears up when talking about his girlfriend who is standing beside him even as she studies hard at school.
Hope eventually decides to follow her boyfriend to Tennessee because she can't find a decent job in New York city --her anguished parents counsel her not to make such a hasty move.
She's later seen with her love in a tense kitchen situation where he warns "I have a short temper."
Judge clearly bonds with her subjects. She's discovered as likable a bunch of young graduates as one could ever meet..
By treating their problems with such evenness she celebrates them but dies not provide a  phony happy ending.
What should be one of the best times in their lives has turned collectively into a nightmare.
MY MILLENNIAL LIFE PREMIERES ON TVONTARIO SATURDAY MAY 28 AT 9 P.M.
MY RATING: ****.