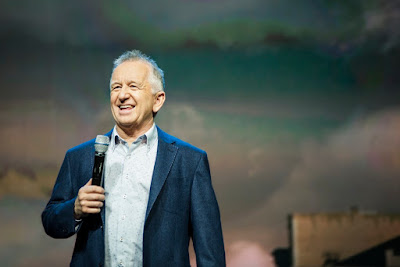 Speaking about his latest New Year's Eve Special (on CBC-TV (December 31 at 9 p.m.), Ron James chuckles that "it certainly was the hardest to write."
When he sat down with his writers in July NDP leader Tom Mulclair was way ahead in the polls.
"But then Prime Minister Harper took the lead. And then Canadians wound up with Justin Trudeau as our new PM."
Says James: "We had to write three different beginnings. Because anything could have happened --and it did!"
And then there's the matter of Donald Trump.
"He started out as the clown, then morphed into something far more deadly, it was difficult mocking him as he sank into the dark side."
Other firsts for James: Alberta turned orange after four decades of Toryisms, Bruce Jenner turned into a woman and captured every moment on his reality series, and the loonie began falling.
Says James "There is comedy in everything but our Canadian sense of comedy is very different from American.
"For one thing we're 33 million and they're 375 million. It's a matter of proportions, it really is."
Last year's CBC special was taped at Niagara Falls but this year "it was Peterborough's turn, specifically Showplace Performance Centre. A fine city with a great cross of working class, intellectuals, young kids, the audiences were special."
And as he always does James taped two sold out shows (Oct. 25 and 26)  "in a venue that's a bit more intimate which really helps my kind of comedy. And as usual there was certainly a full script but I went off on my riffs as the audience warmed to some of my themes."
Think of it --an hour of TV with a guy just standing there making jokes.
But James is an accomplished veteran at assessing the mood of an audience and playing off them.

I think he's right on in the brutal new practice of  "internet shaming".
And then there was the summer rafting expedition in the Beaufort Sea.
"This was something David Suzuki told me to do and a decade later I took his advice and went with my daughter and we were forever grateful."
But --and I'm pressing him --doesn't he miss his wonderful weekly comedy series cancelled by a previous CBC management who were, in turn, cancelled.
"What I miss are the days in the writer's room when we were building scripts. The talent I met on those occasions was awesome."
In fact James says "This year I had enough material for two more shows."
And the appearance of a Canadian comedy show on Canadian TV is so unusual you may want to tape  this one for future viewings.
James says being born in the Maritimes is one reason why he always sees the funny side of life. "Some times it's bitterly funny. It's a way of thinking and I'm lucky I never lost that."
Few of his fans realize it but he did the obligatory stint in Hollywood guesting on such series as Wings and Get A Life.
These life experiences he rolled into the brilliant stand up TV special Up And Down And Shaky Town.
James is momentarily silent when I tell him a Grade Six class was watching his classic 2001 Global comedy TV series  Blackfly and loving every minute of it.
"I think I'll be back in another series, I really do. You learn from all life experiences."
These days he's still out on the road for 35 to 40 gigs a year which will include Caesars in Windsor and many smaller cities "where audiences are hungry for Canadian comedy. Life on the road, it's been a blessing for me."
In fact James says he's already beginning collecting stuff for next New Year.
"It's never too late to begin thinking about the next one, I can tell you that."
RON JAMES NEW YEAR'S EVE SPECIAL PREMIERES ON CBC-TV THURSDAY DECEMBER 31 AT 9 P.M.
MY RATING: ****.