It Takes Guts: TV For Your Intestines 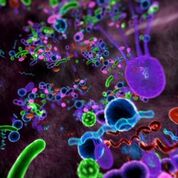 "My idea for this TV documentary (It Takes Guts) really came about when I was finishing my last one.
"I was asking my subject,  British geneticist Dr. Tim Spector what he was doing next and he talked all about his new book The Diet Myth.
"And I knew if I could sell it to a network it might really work out."
The result It Takes Guts premieres on CBC-TV's The Nature Of Things Thursday October 29 at 8 p.m.--it's certainly a provocative journey inside the human intestines.
Veteran documentary director Leora Eisen (Two Of A Kind) is laughing on the phone about how chance often plays a big part in any new project.

"Like a lot of people I wondered how one friend could consume enormous amounts of junk food while another munched on lettuce and couldn't lose an ounce."
So Eisen's journey begins and ends with the remarkable Dr. Spector who is there to teach us there's bad and good bacteria in all of us.
And we then visit a hunter-gatherer out in the woods cooking up a mess of legumes which are particularly favorable to lower intestine well being.
Spector gets college age son Tom to spend a week consuming nothing but junk food --burgers and fries --in an effort to duplicate the results in that great documentary Supersize Me.
In a very short time young Tom experiences feelings of "unwellness" caused by having his intestines out of order. He simply cannot face another burger dinner.
I liked the segment on the microbiologist  (Dr. Allen-Vercoe) who has created an artificial intestine called Robogut to see how it reacts to all kinds of foods.
And there's the guy who keeps his daughter's diapers in his freezer --the reason makes sense and cannot be revealed here.
Eisen has done a masterful job of compiling all the statistics but presenting them as easy-to-understand human tales.
Personalizing the issue keeps us tuned in and expert editing gets all the points across without the viewer ever feeling rushed.

"I'm lucky Spector is such a brilliant guy," she says. Indeed the British scientist has the ability to individualize all the facets of his thesis --his own father died early at 57 and he has been on this hunt for nutritional facts ever since..
He sincerely believes we are simply eating the wrong foods in an era when fast food junk is relentlessly peddled via pounding  TV commercials.
I once had a university professor who argued that original settlers in seventeenth century New France actually ate better in the summer and the fall with fresh meat killed from the forest and fruit and grains coming into season.
Winters were a bit more iffy with habitants living off their grain harvests and the meat they cured.
I think the best line in It Takes Guts is simply this: "You never eat alone.
Because besides feeding our stomachs we're also feeding trillions of microbes in our gut which perform all sorts of duties to keep us healthy.
"Who knew?" says Eisen. "I was certainly ignorant of most of this. But it's one of the hottest topics."
I was so fascinated I wanted to toss out all my canned goods and tubes of processed cheese immediately.
Perhaps a sequel is needed on what to eat and how to get it at reasonable prices.But I'd grant obesity is our number one killer these days and I speak as someone who survived triple bypass surgery last year.
In my case there certainly were hereditary factors but as a reporter for 40 years I'd acquired any number of bad eating habits I still need to break.
Speaking from experience It Takes Guts could be your first step in taking back possession of your gut.
IT TAKES GUTS PREMIERES ON CBC-TV'S THE NATURE OF THINGS THURSDAY OCTOBER 29 AT 8 P.M.
MY RATING: ***1/2.