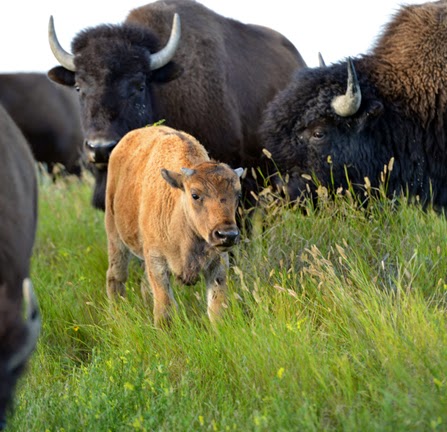 Only a few years ago a new Canadian TV special as important as Grasslands would have enjoyed pride of place on CBC-TV.
But the public network is in free fall and the other "Canadian" networks are busy right now rerunning American programs.
That's why Grasslands debuts Saturday August 23 at 10 p.m. on Oasis HD --the second showing will come up on Citytv stations in the fall.
This is an important reflection on the state of Canadian conservation--it was shot over several years in all kinds of climactic conditions.
The photography is gorgeous but it's the important riff on how we are falling back in efforts to preserve and protect endangered species that should grab you.
"I thought I knew the area since I'd spent much of my life there," Ian Toews, the director and camera man, told me on the phone. "But I kept learning until filming stopped.
"We started shooting in the winter of 2011. I could have gone on forever, well almost. Every time I came back to the project there was another challenge."
Toews wanted to look at the disappearing prairie landscape through the eyes of people who knew it best:
"I felt the way it was going the shrinking prairie would soon become a harsh statistic --and be gone from memory."
He looks at the challenges through the experiences of a number of people passionate about keeping it going: a Blackfoot who is also an academic, a rancher, an American in Montana, even a sound recorder.
Ironically this is the last Saskatchewan documentary Toews will make --the provincial Tory government cancelled its tax subsidies for the arts and Toews and his Regina-based 291 Film Company relocated to Victoria, B.C.
"They give subsidies and help to farmers, the oil interests, the potash industry but not to the arts," he says. "That's sending quite a message."
It was because of the tax credits that CTV's hugely successful  series Corner Gas flourished and helped produce a growing tourist boom in the province.
And it's not as if Grasslands was made with a huge crew --its luxuriant photography was filmed on an Arri Alexa camera, the state of the art 4k camera --the crew was usually just two or three members including Toews who did the photography himself.
"When you're out there it's prudent to only have a few people around or the animals would notice and leave," he laughs.
"But being in a blinder for days in wintry conditions isn't a whole great experience."
The theme of the hour is the relationship of everything to everything else and how it's been this way since the Ice Age re-carved the landscape.
The grasslands need the bison munching away to keep the grasses short. The owls need the old burrows originally made by gophers. Fires can actually be beneficial since they do not touch the root systyem which can quickly reproduce after a conflagration.
Plopping down electric poles gives predators such as owls and hawks unfair advantages --they can perch on the poles and easily pick off their prey.
Winters are especially hard on the larger animals --there are shots of one deer herd as the narrator notices how thin they've become, perfect targets for the coyotes to pick off. Yet mice and voles live under the snow and ice only to re-emerge in spring.
And, yes, there is sadness as we watch the mating habits of the sage grouse and learn their numbers have so declined there are less than 100 left.
The great grasslands harbor as much carbon as huge forests --when disturbed that carbon escapes under the relentless exploitation of oil and gas companies.
A rancher takes us to an abandoned shack with two rooms -- no hydro or running water and says people do not want to live like that these days.
What will happen next? That's what Grasslands is all about.
The fact there's still a place for a uniquely Canadian true story like Grasslands makes me believe Canadian TV still has a future.
And I'm wondering if you'll be as affected by this TV event as I was?
GRASSLANDS PREMIERES ON OASIS TV ON SATURDAY AUGUST 23 AT 10 P.M.
MY RATING: ****.