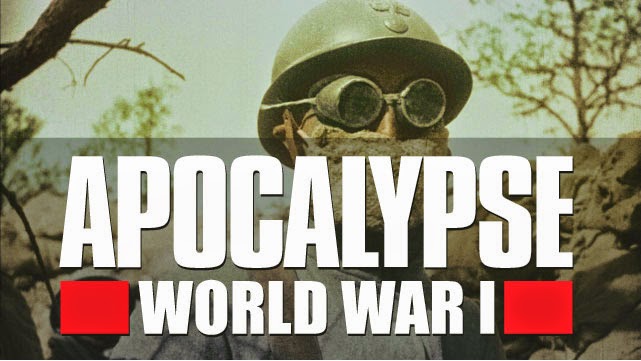 TV is supposed to wind down in the lazy, hazy days of summer into a sea of endless reruns.
But all of a sudden TVOntario presents an epic series and one that's certain to be labelled must-see TV.
It's the five hour five part documentary account Apocalypse: World War 1.
The title may seem more than vaguely familiar because it's a sort of prequel to Apocalypse: World War II  which keeps popping up on History at odd times.
This one is also a French-Canadian co-production but one that TVOntario has brilliantly snagged.
It revs up with the first episode on Monday July 14 at 10 p.m. (repeated Tuesday night at 8:30).
It will be available across Canada on tvo.org starting July 15.
The first episode which ran in March on French TV snagged 22.5 per cent of total viewers, a sensational figure.
Directors Isabelle Clarke and Daniel Costelle started off with 500 hours of archival material.
Like their previous World War II project they supervised the cleaning of the films and the coloring of them which is done so expertly most of the time you forget the standard faded prints of Great War documentaries.
Part One should really get you addicted. It presents a placid portrait of Europe in the summer of 1914 --a continent which had largely avoided war since Napoleon.
Then the images become stark: the assassinations in Sarajevo of the heir to the Austrian throne and his wife --the newsreel footage is clear and could just have been shot.
But we also see the strangely tepid reaction of the Austrian emperor out on a hunting expedition --after all he had already seen his wife assassinated and his son a suicide.
Gradually we are introduced to the main characters --most of the film is new to me and some of it is brilliantly chosen: German emperor Wilhelm II  always trying to hide his withered arm by clutching a sword.
King George V and Russian czar Nicholas II Look like twins --but one would be shot in a cellar after the other refused to come to his aid.
We see how excited the crowds were in the European capitals as war came --everyone expected to be home for Christmas. Much of the feeling of doom comes from the home movies of one typical upper class French family who never realized their world would soon come crashing down.
Episode 2 titled "Fear" looks at how the trench warfare came to dominate the campaign and how the horrendous casualty count mounted until both sides had literally run out of fresh recruits.
The titles of the episodes deepen: "Hell", "Rage", then "Deliverance" as centuries old empires crumble away and dangerous new societies are born.
But this is more than a military account of campaigns waged --we look at the horrendous destruction of the French countryside, how horses were killed at record rates, the booming business in artificial limbs, the determination of English girls to get married at any costs because they feared with all the men gone they'd be doomed to old maids.
Of course young viewers will get the most out of it --it's too bad high school is out for the summer because Apocalypse should be required viewing for them.
A lot of familiar faces pop through the story from young Ernest Hemingway in the Italian campaign to Adolf Hitler stuck in trench warfare to Lenin being secreted by the Germans into Russia to preach revolution.
Apocalypse: World War 1 even has time to show Canada's participation and how the war changed the British Empire forever.
It runs over five Mondays to August 11.
And I'm hoping later on TVO will run all five episodes as a block one night --next year's Canada Day would be a great time and opportunity.
APOCALYPSE: WORLD WAR 1 PREMIERES ON TVONTARIO MONDAY JULY 14 AT 10 P.M.
MY RATING: ****.

This has got to be the most revisionist treatment about World War One that I have ever seen. This is the view seen through socialist/communist spectacles.

Someone wanting to see a more factual treatment should watch the BBC series from a few years ago based on Hew Strachan's book The First World War.

Any idea when this will be made available to purchase for my home collection?

This series contains many, many factual errors in both the interpretation of the images shown, and in the description of the history they represent.

I assumed that the problem was a poor translation from French; but it's worse than that.

This sort of thing is dangerous as many more people will watch it on television, than will read books.

Broadcasters should be aware of this.