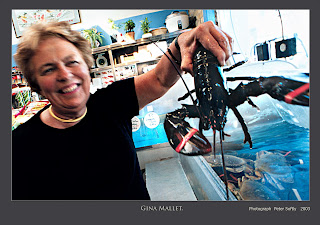 I am utterly devastated by the news critic extraordinaire Gina Mallet has died of bile duct cancer, aged 75.
When I was head hunted by The Toronto Star to be the new TV critic in 1980 I was given the desk next to Mallet because as it was explained to me "nobody else wants to sit next to her".
She could shout out her disdain for the entire newsroom to listen as she berated editors and colleagues alike over our shared short comings.
The Star management didn't quite know what to make of her.
She joined The Star from Time magazine in 1977 and immediately let it be known she would not lower her standards just because a certain production was Canadian.
One enraged  theater nationalist even stormed into the newsroom determined to slap her in the face.
Instead he got his bearings mixed up and lunged at entertainment editor Shelley Chusid before security guards led him from the building.
The more enraged the nationalists became the more tightly The Star clung to Mallet who truly relished her role as a promoter of quality theater.
Her background included stints at Oxford University and the Sorbonne and her knowledge often surprised people.
When Jeremy Brett (TV's Sherlock Holmes) casually mentioned he had been married to Anna Massey Mallet interjected :"Oh, yes, we shared the same nanny as children."
When she profiled Maggie Smith the actress stated it was just abour the best piece she'd ever read.
Lunching with Ralph Richardson at his London home and the grand old trouper was so taken with her he offered a ride back to her hotel --on the handlebars of his motor scooter which Mallet gratefully declined.
She had the dazzling ability to see a new play and be back in her Star cubicle by 11 p.m. pounding out a masterful critique of what was right and what was wrong.
I sometimes felt sorry for Star assistant editor Archie Williamson who bore the full brunt of her fury if he didn't deliver an adequate lay out for her review.
One evening staffers on the night desk looked over and saw Mallet punching Williamson in fury and shouting "I want the front page...I want the front page."
At her best Mallet produced just as exciting a read as her famous predecessors Nathan Cohen and Urjo Karda had in their prime.
Mallet eventually tired of the stress and went on to a career freelancing for The Globe and Mail until she was named restaurant critic of The National Post.
I never went to a single restaurant she wrote about but I always read the reviews as examples of great food literature.
I also enjoyed many lunches with Mallet and The Star's former film critic Ron Base where her opinions were as forceful as ever.
I was also delighted her great book Last Chance To Eat won the James Beard award for food writing.
In recent years she'd slowed down somewhat but remained as opinionated as ever.
Her death shocked me because it was so out of character.
I thought she'd be shouting and fighting to the end but she finally just slipped away ever so peacefully.