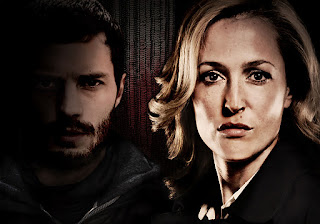 Remember the days not so very long ago when TV networks switched to reruns until September's new season came rolling around?
No longer. Earlier this week the terrific new short form series Secret State debuted on Super Channel.
And Saturday night it's Bravo's turn with the new five-part psychological thriller The Fall starring Gillian Anderson (X Files).
I remember when Bravo debuted and used to devote a weeknight to British TV only to veer away when ratings proved disappointing.
Well, both State Secret and The Fall are British made. And both are must see this summer.
Anderson persuasively plays a kind of Jane Tennison detective despatched to Northern Ireland to help police unravel a series of disturbing murders --the killer slowly tortured and strangled his victims over several hours.
Unlike Criminal Minds which hunts sadists weekly and always comes up with a capture The Fall is far denser and creepier in tone.
For one thing we get to know who the killer is right in the first few minutes -- as played by Jamie Dornan, Paul is a handsome social worker, great dad and handsome and educated to boot.
But he loves torturing and murdering upscale brunette woman. First he learns out all he can about then and then calmly and cautiously sets upon a method of entrapment.
Anderson's British accent might quaver a bit but she aces her part, too, an often immoral detective who on one of her first nights on the job beds a handsome detective she fancies only to boot him out at dawn.
As Stella Gibson she's spectacularly successful in a profession still dominated by older men who initially dismiss her thesis all the murders have been committed by one man.
The veteran detectives on the beat (the location is Northern Ireland) don't know what to make of her deductive theories.
They've also been on the hunt for the wrong kind of male.
As the killer Paul Spector (played by Jamie Dornan from ABC's Once Upon A Time) is thoughtful, a good husband and loving father. But his mind is always elsewhere. In other words in this case his cover does not march his deep, murderous actions.
Fine acting dominates every scene.  There's John Lynch as Gibson's superior who once had an affair with her (but who didn't).
The pathologist is aced by Archie Panjabi, the young lesbian officer who is Gibson's chief investigator is played by Niamh McGrady . Also, Bronagh Waugh is outstanding as Spector's completely unsuspecting wife.
Allan Cubitt created it and his biggest credit is Prime Suspect so it's no wonder the investigation looks like an update of PS at times. But some reviewers have called it a British take on the Killing.
I think Anderson is very successful but Dornan even more so as he gradually reveals the coiled killer behind his boy next door looks. this kind of casting against type is super creepy.
as he kills Gibson must up her game iof she wants to entrap him. A very demanding professional, she understands failure would blur the luster of her career.
And she very much needs the satisfaction of an arrest.
So the story becomes two pronged --Spector stalking victims and Gibson stalking him.
BBC has already announced a second season for the miniseries that is cool, creepy and oh so very slow compared with American TV's fast paced but facile police shows.
THE FALL PREMIERES ON BRAVO SUNDAY JULY 7 AT 9 P.M.
MY RATING: ****.