Bitten Is Back For Season 3 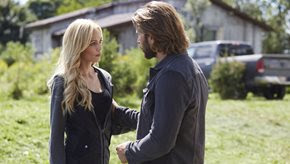 It's not everyday that Canadian TV ventures into the supernatural.
Way, way back I can remember being on the set of the CTV hit (Forever Knight.
It was in 1996 and Geraint Wynn Davies was a blonde vampire.
Also on the set that day was a young Kristin Lehman now starring on CTV's Motive.
And more recently I had the chance to chat up pert Tatiana Maslany on the set of  Orphan Black.
And then there's Bitten which returns to Space for Season 3.
You can catch the first new episode Friday February 12 at 10 p.m.
To say that Bitten has been an unalloyed hit from the beginning would be a bit of a stretch.
But I've kept watching right along.
It was created by Daegan Fryklind also responsible for Motive, The Listener and she knows how to keep people hooked and watching week after week.
This  series is based on the series of books called Women Of The Otherworld which I have yet to read --Kerlly Armstrong wrote them and has a huge following --on U.S. TV the series is carried on Syfy.
Laura Vandervoort is stunning as Elena Michaels --yes she's beautiful but also has the acting chops to make us believe.
Also making significant contributions are Greyston Holt, Greg Bryk, Steve Lund,  and Genelle Williams.
Poor Elena is a female werewolf and there's a lot of stuff about balancing that and trying to find peace.
There's the sense of constantly being on the run and some of the nastiest physical confrontations as prey are beaten, punched and even hanged into submission.
Shots of wolves running through forests are almost poetic but the story does not depend on fancy special effects.
Rather it's the sense of uneasiness that's always there.
These human wolves run as a pack, they have to stick together or they'll be taken down and no outsiders can be trusted.
The look of each episode is spectacular and I think this is the contribution of  production designer Rory Cheyne and director pf photography Craig Wright.
Also, veteran David Wellington directed the first two new hour episodes asnd he knows how to keep us hooked.
I keep hearing this will be the final block of 10 one episodes which surprises me as it has made Space vastly competitive --Space is number one among Canadian specialty channels--but Bitten must be one of the most expensive Canadian series in cable TV.
I've been told this decision was made at the beginning of production of the third season meaning a complete resolution will wind up this exciting series.
Revelations come pounding forth and I liked the way John Ralston steals scenes as the enigmatic Russian werewolf  Sasha who has been on the run for 30 years and is unknown to other wolves in the area --his scenes with Laura Vandervoort as Elena have the snap and cracle of great dramatic tension.
And if Bitten does as well as I suspect in Season 3 just maybe Space will reconsider its termination notice --after all werewolves are notoriously difficult to kill off.
Bitten was produced by No Equal Entertainment and Hoodwink Entertainment for eOne.
THE THIRD SEASON OF BITTEN PREMIERES ON SPACE FRIDAY FEBRUARY 12 AT 10 P.M.
MY RATING: ***1/2.