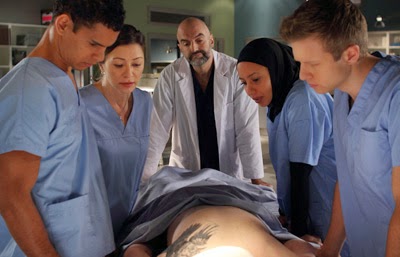 A British friend of long standing was recently visiting me so I asked her after a week what Canadian TV drama series she particularly liked.
It was, of course, a trick question and she wandered right into my trap.
"I didn't see any," she said quickly confused by my line of attack.
But she had.
Sh had watched and liked Saving Hope, Rookie Blue and Motive, hadn't she?
"Or are those shows Canadian?" she blithely shot back.
Well, they are and they aren't.
These series are shot in such a cunningly deceptive way as to be quickly exportable to U.S. TV networks.
But try and fin examples of Canadian Canadian TV dramas and the hunt is far more difficult.
That's where TVOntario's super hospital series Hard Rock Medical comes in --the second season revs up Sunday February 15 at 8 p.m. with the first two new back to back half hours.
Everything about this show shouts "Canada" from the fetching cast of Canadian actors to the location of Sudbury to the drama of medical students studying to practice medicine in our Far North.
Now, I've been covering TVOntario since before it was ever conceived.
I started out as a TV critic at the Hamilton Spectator in 1970 and sat in on many of the early planning sessions as TVOntario was formed in 1972-73.
From the start there was embarrassment that TVO could simply not afford high priced original Canadian drama and this mantra continued to be repeated by ever programming chief I ever interviewed.
But it was palpably false all along.
Look at the audiences drawn to the low rent antics of the various Degrassi series and the more recent teen fave Step Up.
When the first season of HRM premiered on TVO in June 2013 I could sense a great barrier had been broken down.
The medical show follows the lives of eight prospective medicine students who decide to study in Subury with the understanding they will continue practicing medicine in the Canadian north.
I interviewed the savvy creator veteran producer-director Derek Diorio --I had first interviewed him when he played the character Haggis Lamborgini in the TV series The Raccoons.
Later on Dorio was making a series for TVO's French arm TFO which has even less production funds called Meteo+. He then made a second TFO hit: Les Bleus De Ramville (20123) and perfected a technique of making Canadian drama at lffordable costs.
I've just previewed the first two new episodes and can report the second season is even better than the first --scenes are smoother, better edited and the crisp photography is up to the standards of any prime time drama.
Among the actors there isn't a weak link. Patrick McKenna (Red Green) continues to shine as the alcoholic Dr. Healy.
Nancy (Angela Asher) has moved in with him, adopted some of his bad habits and must now confront the reality her soon-to-be ex-husband has sustained a massive stroke and is now in a vegetative state.
Charlie (Stephane Paquette) is told his wife is expecting for the third time meaning he'll have to sell his beloved Harley Davison to payt the bills.
Instead of gloss HRM peddles grit and realism. It's so toptally different from any other Canadian TV drama --that's why it is so welcome.
Other fine actors include Mark Coles Smith, Christian Laurin, Kyra Harper,  Jamie Spilchuk , Rachelle Casseus and Danielle Bourgon.
Hard Rock Medical is hopefully pointing the way to a new kind of Canadian TV drama.
HARD ROCK MEDICAL'S SEASON 2 PREMIERES ON TVO SUNDAY FEBRUARY 15 AT 8 P.M.
MY RATING: ***1./2.