Babies: Smarter Than We Think? 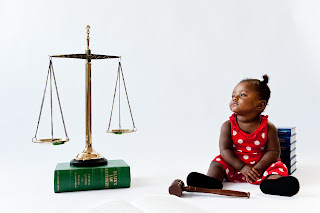 How does one pitch a show to CBC-TV about the moral development of babies?
Well, writer-director Eileen Thalenberg did exactly that and the result Babies: Born To Be Good ? makes for  an absorbing hour of TV.
"I think it's all about a re-thinking of how babies develop," she says. "The old school insisted babies were fairly amoral creatures. Now we're seeing babies seem to be born with qualities where they seem to prefer goodness."
The result is on The Nature Of Things on CBC-TV Thurs. Oct. 25 at 8 p.m.
I mean we're really talking babies here. A cute three month old watches the actions of a nasty otter and a nice one and picks --the good ottter. I mean this kid is only beginning to learn how to sit up --he can neither crawl nor speak but there he is already is making a moral judgment.
And as the babies grow into tykes their moral judgments become even more complex but almost always still veer to the side of goodness and fair play.
In fact some scientists are almost insisting this concept of good and evil may be hard-wired into our tiny human brains.n
"A lot of breakthrough research convinced us there was a big story here," Thalenberg explains. "And then we went filming both here and China and were amazed how very tiny children can make judgments."
Thalenberg always operated with a hidden camera  (or two) making this a kind of infants' version of Candid Camera.
"A few times we were spotted out by the children but it was always the boys who noticed. And in most cases they just went on with the game at hand."
At a very young age many children seem willing and able to provide help if asked. One little girl gives up all her toys willingly in this way and another two-year-old jumps out of her wading pool and her toys to help an adult.
But Thalenberg really hits home with her comparison of the differences between Asian and Canadian children. The young Asians come from a culture admiring group effort and modesty.
The North American model seems to be more individualistic and boasting.In one test spanning the continents a teacher leaves her messy floor to get some supplies. The Asian children clean up after the teacher refuse to be boastful about it.
The Canadian children also clean up but they also say so because in our society the act might be considered a positive step.
Thalenberg is a widely respected veteran documentary film maker --I especially liked her 2010 portrait of fiddler Oliver Schroner Silence At The Heart Of Things.
But what about working with literally hundreds of very small children. "A challenge for sure" is how she terms it and says there were comparitively few breakdowns.
"In fact when we had a showing recently some of the older kids in the film  --I mean around six--sat and watched throughout and I feared they'd soon be fussing." Perhaps they were making another moral judgment as well?
Thalenberg wrote and directed it for Stormy Nights Productions.
BABIES: BORN TO BE GOOD? PREMIERES ON CBC-TV's THE NATURE OF THINGS ON THURS. OCT. 25 AT 8 P.M.
MY RTATING: ***1/2.