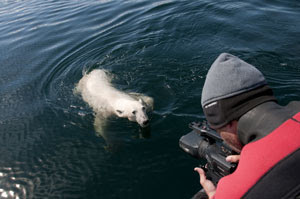 Make a point of catching Polar Bears: A Summer Odyssey on The Nature Of Things Sunday night at 7 on CBC-TV.
It's one of the best reasons I can think of for contuing to support the beleagured national TV network.
A lot of care has gone into this hour long look at the plight of the polar bears on the south west side of Hudson's Bay.
Climate change threatens their very existence. Over the past two decades the polar ice cap has dwindled so drastically there ice is melting a full month earlier than before.
That means the bears who must eat at least 43 seal pups every winter to survive the summers are endangered.
"We wanted to tell this in terms of just one bear --he's about three years old, a teenager in bear terms," says film maker Adam Ravetch who directed it along with partner Sarah Robertson. :And this us his first summer away from his mother."
"I like to get as close as possible which can be dangerous. But after a bit the bear began to recognize me and I kept my distance and we just followed him along."
The result is mesmerizing in terms of beauty. The bear must first swim for days just to reach the shoreline. I wasn't sure watching it how Ravetch accomplished this but one dazzling shot is taken underwater as we watch the bear swimming above us near the surface.
"I swam with the bear. " he tells me on the phone from his Victoria home. But Ravetch has said swimming with walruses is far more dangerous."
Basically this is a survival story.
"Summers are the hazardous months for these polar bears not the winters. Polar bears lack sweat glands and they must take shelter from the blinding heat --sometimes it's in water but they are in a a state that's been termed "walking hibernation".
By luck this teenager latches on to a mother and her two cubs following them in the dim hope some food can be discovered. And a giant beached beluga corpse offers nourishment for all --the whale was trapped when the tide went out.
The mother has to protect her cubs from rampaging males --cannibalism is not uncommon. And in one fantastic scene she is followed by an enormous black wolf --wolves have also been known to prey on young cubs.
Says Ravsetch:"It took polar bears 100,000 years to evolve into this specie perfectly asddaptable to the Arctic. Now climate change is threatening them within a few decades. Fewer young are surviving to maturity because they just can't cope."
Ravetch usually works for the National Geographic channel but with Polar Bears he found the perfect match up with The Nature Of Things.
One amazing shot has the young bear climbing a rock cliff to get at nesting birds for a meal.
"I'm not sure it was worth the energy expended," says Ravetch. "Birds are just bones and feathers lacking the substantial fat the bear would need."
Victoria based Ravetch worked in the north while host David Suzuki read the narration in a Vancouver studio and the production company Arcadia Content did the editing and postproduction in Halifax, truly a transcontinental achievement.
Polar Bears reaffirms my belief CBC can remain the vital cog in Canada's TV industry providing the funding is adequate.
POLAR BEARS PREMIERES ON THE NATURE OF THINGS ON CBC-TV ON SUND. APRIL 8 AT 7 P.M.
MY RATING: ****.
.
Posted by james bawden at 2:21 PM