Republic Of Doyle Is So CBC 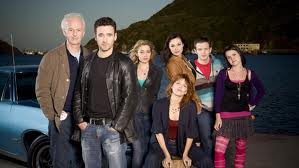 Over the four decades I've been covering CBC TV the argument about drama series has always been the same.
It comes down to story line versus production values.
Veteran CBC producers would always point to the phenomenal success of shows like The Beachcombers as an example of a series that Canadians wanted to watch despite the meagerness of the usual production values.
But others kept insisting a CBC had to be as glossy and slick as a competing U.S. series. Hence CBC successes like Street Legal.
Indeed when it came to dramatizing a Calgary oil tycoon's family CBC preferred to shoot everything at its Toronto TV factory to keep the gloss as high as possible.
Or does anybody out there remember the resulting 1983 TV series Vanderberg?
And then along comes a CBC drama series as completely Canadian mandated as Republic Of Doyle which returns for its second season Wed. Jan. 5 at 9 p.m.
When I watch it I immediately think of that old U.S. show Harry O with a dash of Rockford Files added for good measure.
See, part of CBC's Canadian mandate is to make shows out in this vast country of ours.
Black Harbour was made in Nova Scotia.
Jinnah On Crime was made in B.C. as was Intelligence. These days Heartland does the trick.
Republic Of Doyle, however, can't be compared to the American competition because it very definitely is not slick.
Focus is on relationships. That and the beauty of St. John's Newfoundland.
It's not the first CBC attempt to mount a series from Canada's easternmost province.
Let's see the most recent example was Hatching. Matching And Dispatching.
CBC typically gives its fictional series two seasons to find themselves because the network hasn't the wherewithal to finance huge publicity campaigns. So the fact Republic Of Doyle is into its second season doesn't mean it's in the hit status. As yet.
Allan Hawco who co-created the series stars as bantam detective Jake Doyle who is a 30-year old detective in partnership with his old dad Malachy played zestfully by scene stealing Irish character star Sean McGinley.
They're the Odd Couple of the detective world.
Jake is all bluster while Malachy is more meticulous and is recovering from delicate heart surgery.
Then there's Mal's gal pal Rose Miller played warm and winningly by Lynda Boyd. Jake's ex-wife Nikki is played by a real looker, Rachel Wilson. And there's Tinny Doyle who is Mal's 16-year old granddaughter (Marthe Bernard).
So it's quite a menagerie. And plots are focused on the eccentricities of this clan.
Jake is the leader of this pact. He's a heart throb to the lades but gets a bit of acting mixed into every story line, too. In the opener he even strips down to his undies and gives an elderly lady neighbor a bit of a thrill.
The catch word here is "lighthearted". One would have to be very desperate to hire these two detectives who spend more time arguing than settling down to crime solving.
Certainly the first new crime is nothing much at all, written in a wandering style by Hawco himself. There are any number of stops for characters to do their shtick and never do we feel anybody among the regulars gets really threatened.
The beauties of St. John's are amply covered and there's been an attempt to water down the accent so all Canadians can understand this particular dialect.
In its sleepy eyed way Republic Of Doyle tries to straddle that age old CBC controversy. It has a story line that dawdles all over the place but it's also right handsome to look at.
REPUBLIC OF DOYLE'S SECOND SEASON PREMIERES ON CBC WED. JAN. 5 AT 9 P.M.
MY RATING: ***.
Posted by james bawden at 12:03 AM