Where Is Kevin Newman Going? 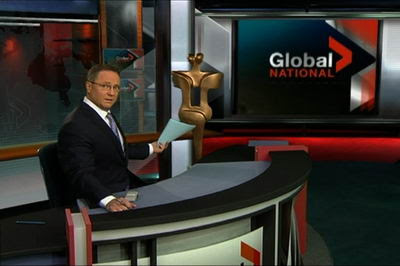 Did Kevin Newman jump or was he pushed?
The classy Global TV anchor is celebrating his tenth anniversary as the anchor of Canada's third network by jumping ship.
In a way I don't blame him, Canwest is in terrible shape these days. The newspaper are solid profit earners these days.
And Newman has shown that there is a large audience for a national Canadian newscast early in the evening --CBC's is on at 10 while CTV's is on at 11.
Biggest irony: Newman with a mere decade under his belt is at 50 the youngest of the three national anchors.
CBC's Peter Mansbridge, 61, has been anchoring The National since 1988.
And over at CTV the venerable Lloyd Robertson, 76, has been fronting CTV news simce 1976 --he was on CBC 's National 1970-76.
Canwest is having major money problems and maybe Newman felt the hassle to produce a daily newscast just wasn't worth it.
And there's always the retirement issue: Mansbridge and Robertson are in superb form these days but everybody has to retire some day.Would Newman replace either of them?
Newman wasn't talking --an internal Global memo was leaked out and there are the inevitable questions about his successor.
On Canadian TV we have three white guys as anchors.
On American TV CBS's Katie Couric and ABC's Diane Sawyer are the new TV feminists with NBC's Brian Williams the sole male.
Newman could always go back to U.S. TV. He defected from CBC's Midday to headline ABC's all night newscast with fellow Canadian Thalia Assuras.
Then he was briefly the host of Good Morning America before Sawyer took over --in those days another Canadian Peter Jennings was his mentor at ABC.
At Global there's always been a tradition of a solid anchor. The Weblet went on the ar in 1972 with Peter Trueman and Peter Desbaratts as co-hosts but after financial problems Trueman emerged as the sole talking head.
So I'm still asking: what's next for the personable Newman?
Posted by james bawden at 10:25 PM

It saddens me to lose Kevin Newman as Global's News anchor. He is a man who has always inspired confidence, trust and sincerity not to mention a certain compassion and humour that he brings to the news desk each evening. He will certainly be missed.

I worked at Canwest when it was annouced that Kevin was moving to a new state of the art building (not yet under construction) in Ottawa. Maybe he didn't want to leave Vancouver.

Canwest was in trouble at that time, so good on him for leaving a sinking ship. I got canned!!!!!