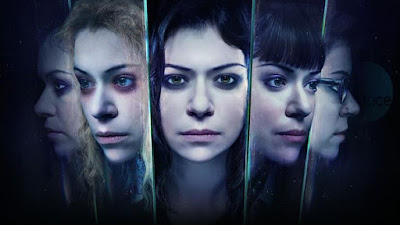 So there I was at the local street bash in my Toronto neighborhood and a neighbor from several blocks away is telling me she never watches Canadian TV drama series.
"But you've just said you're a loyal fan of Orphan Black," I told her. "And it's made right here in Toronto."
And boy did she look surprised and chagrined!
I'm always getting that kind of guff from people addicted to American serialized TV dramas.
So it pains me a bit to report this is the last season for Orphan Black which certainly blew back on a lot of stereotypes.
Here is a Canadian series that is beautifully made in all departments and lead Tatiana Maslany has soared to super stardom --and even won an Emmy as best series actress which I think must be a first for a Canadian TV show.
But this isn't all a rave --I felt the death of a beloved clone on last week's episode went far too far.
One could hear the crunching of the bones and the scene was far too violent for other fans, too, judging from reactions on the fan base.
"Clonicide" was the word used.
Star Tatiana says the staged death scene was "awful"and she had a sort of rig installed as the character got stomped to death.
Co-creators John Fawcett and Graeme Manson say the death scene was planned for last year's Season Four but delayed until the final outing to make maximum dramatic impact.
I found the first few episodes of Season 5 to be a bit disappointing and that's because on all serialized drama cliffhangers have to be resolved or explained away.
But what has always distinguished this show is the sheer professionalism, call it "the look" of each episode.
Production designer John Dondertman deserves a lot of credit along with his whole staff and the same goes with costume designer Debra Hanson and director of photographer Aaron Morton.
And then there are the Canadian directors: Helen Shaver, David Wellington, Grant Harvey, David Frazee, and Morton again.
I visited with Maslany at the end of the first batch of shooting --I'd long admired her for her guest work on such other series as Heartland.
She didn't seem to believe me when I told her her career would be changed --for the better --and was off to New York for the first batch of publicity.
Garnering an Emmy was big news --I'm trying to remember other actors on Canadian series who were similarly noticed.
Indeed when the Toronto version of Queer As Folk was running the executive producers told me it would garner no acting Emmy nominations because the voters were U.S. based and not likely to nominate "runaway productions".
Anyhow I'm determined to watch the last batch of Orphan Black and wonder what's next for Canadian TV series drama --what will be the next great show or is it already in the works?
.

X Company was outstanding, and all three seasons are now on DVD