Little India: Village Of Dreams A Must See 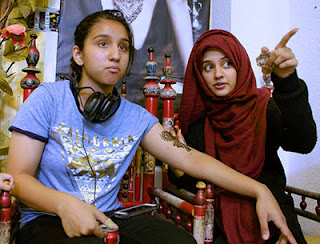 It's entirely appropriate for the brilliant new documentary Little India: Village Of Dreams to premiere on Canada Day --it runs Saturday July 1 at 9 p.m. on TVOntario.
Filmmaker Nina Beveridge tells me on the phone the ambitious film took a year and a half to plan and make --and that included multiple shooting days in the neighborhood.
I well know the location in east end Toronto along Gerrard St. East just before Coxwell--I attended Riverdale College at Gerrard and Jones, graduating in 1964, when Riverdale was an all white Protestant bastion.
Today all that is changed and Little India has become an important hub of South Asian commerce--in the 1980's and 1990's on a Saturday night Gerrard was so packed with tourists the Carlton streetcar often got stuck.
"I wasn't exactly sure of the focus at the beginning," Beveridge says. "It was always going to be a group portrait of the two generations of immigrants who have made it such a vibrant area to visit."
"I live only a few blocks away so I can walk there in 5 minutes."
Says Beveridge "The street is changing all the time. It has to for survival. There are other India concentrations out in suburban malls.
"In the summer weekends crowds will still gather. I thought I knew the area but it became a voyage of exploration for the whole crew."
Beveridge's method closely resembles the best work of master documentary maker Frederick Wiseman.
She concentrates on the people who live and work there and how they have changed while still cherishing their vital culture.
"It's about two generations --the immigrant parents and their Canadian raised offspring."
The original store keepers emigrated from South Asia starting in the early Seventies and built their businesses along Gerrard Street --the historic Naaz cinema was surely the backbone of the community.
"But now it has gone --a victim of changing times."
And the last time I took a streetcar ride I noticed the street seemed depopulated with many key shops shuttered --the next generation have moved out to Brampton and no longer live over their stores.
"The culture is still there. But gentrification is happening. Those who own their stores seem to be better off than the renters. The traditional fashion stores are still there and the beauty parlors but the next generation want more modern facilities.
"But even the culture back in India is changing."
Beveridge's challenge was to get these normally reticent people to open up. Her interviewing skills really shine forth.
"I had to get them used to the camera. In a very early shot I had two boys talk about their late father --they showed me the memory box they'd collected with things like his socks. It's a great moment, it just happened spontaneously.
"Really, it was a matter of trust, getting people to talk personally about their way of life and how it may be changing.
"The basic theme is what happens next. Two of the second generational girls aim for careers in criminology. Some accept the traditional arranged marriages, others do not."
Little moments illuminate this group profile
Like the joyous woman finally planning to movein the 1980s and 1990's into her own home in Brampton  after living in a huge home as part of an extended family. Her feeling of liberation at this is brilliantly captured.
The two brothers who lost their hard working father to a sudden heart attack seem conflicted --keeping his restaurant has been their goal working with the mother. But the older brother now goes to Upper Canada College and could have a brilliant future in other professions.
We get to visit the Forever Young Beauty Salon and Spa which peddles traditional Pakistani beauty secrets and cosmetician Yasmeen Zulfiqar-Khan is passionate about her great successes but her daughters seem rather ambivalent.
One daughter has stated her own event company which is already heavily booked while the pert teenager thinks policing might be her future.
While Indian themed business drift away other cultures are being featured in the new stores.
"Ethnic awareness is an basic theme. These people have survived and thrived and we should celebrate their uniqueness. I think the city should be proud of being so inclusive."
Beveridge says boiling the TVO print down to 58 minutes was "very rough. There'll be a longer version. And there are other materials including web shorts  coming up on the TVO website."
LITTLE INDIA: VILLAGE OF DREAMS PREMIERES ON TVONTARIO SATURDAY JULY 1 AT 9 P.M.
MY RATING: ****.