The Curse Of Clara: A Christmas Treat 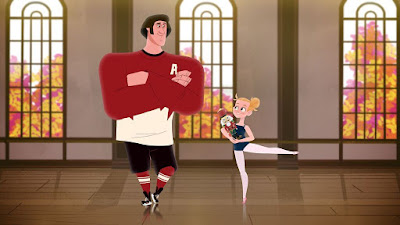 Christmas on TV has always been a very strange time.
The American networks foist on us animated specials which are decades old and feature the singing talents of such delightful but deceased stars as Burl Ives, Jimmy Durante and Bing Crosby.
So may I suggest something new this Yuletide.
It's the simply smashing Canadian animated featurette The Curse Of Clara which premieres on CBC-TV Monday December 14 at 7 p.m. Got that?
Instead of Crosby and Ives how about some genuine Canadian superstars in the presence of Phil Esposito, Hockey Night In Canada's Bob Cole and Karen Kain along with E.N.G.'s Sara Botsford and talented Saara Chaudry (Degrassi) as Vickie/Clara.

To get the proper historical perspective I phoned up  writer/producer Vickie Fagan who fessed up that "The story is indeed partly autobiographical
"It starts in the summer of 1972. I was from a small town in Ontario and I wanted to study ballet. And I was a student at the National Ballet school (1972-77).
"I did indeed get an offer to dance Clara in The Nutcracker. And I was told the story of the curse --that Claras never get to do ballet as adults."
Interpolated is the stirring saga of the Canada-Russia hockey series.
I must add here that as the very young TV critic for The Hamilton Spectator I got the only one-on-one interview with the late/great announcer Foster Hewitt at his radio station CKFH as he prepared to leave for Moscow.
Fagan thought she had the making of a true TV classic and proved it when she went out and got Veronica Tennant as producer.
Fagan wrote the TV script with Jeremy Diamond "which was tough because everything has to happen in just 22 minutes."
Then came the choice of animators and she chose well in directors M.R. Horhagher (I hate You Red Light) and Mike Valiquette (Captain Canuck).
Smiley Guy Studios has produced outstanding animation --the characters drawn completely reflect the personalities.
Fagan enjoyed the trip backward. "I was there until I was 17 and I sort of burned out on ballet.I wanted a more normal life and that included other forms of dance."
She agrees the dance mistress "is a compilation of many ballet teachers from that era. Discipline was the key word. I'm not so sure it's like that these days.
"But I still say ballet is part of my DNA."
When told the story "absolutely must be animated, her first thought was to pitch it to CBC "and we were accepted!"
Then came her stint at Smiley Guy "with 30 animators. And the way they got right the dance steps --it was perfect.
Then came time in the recording studio with such stars as Esposito who was very nervous, it's not his thing. And we were all nervous about meeting this larger than life personality. I asked him if he ever missed hockey and he said 'I miss it every day.'"
My fearless prediction is that The Curse Of Clara is going to be TV's next big Christmas perennial.
THE CURSE OF CLARA PREMIERES ON CBC-TV ON MONDAY DECEMBER 14 AT 7 P.M. (REBROADCAST DECEMBER 25 AT 5:30).
MY RATING: ****.