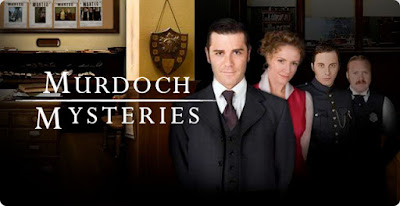 I remember the first time I visited the set of Murdoch Mysteries.
It was in the summer of 2008 and what had originally been three two hour TV mysteries starring Peter Outerbridge (and shot in Winnipeg).
Then the concept went to weekly hours with a new Murdoch in the person of Yannick Bisson who I'd first interviewed when he was the 15-year old star of the CBC-TV flick Hockey Night.
By that time Outerbridge was making another series for Shaftesbury Films --ReGenesis.
Years later City dumped the series not because it wasn't doing well but because Rogers was about to gorge on NHL hockey and no longer needed MM as Canadian content.
City's loss was CBC-TV's gain and the pleasant Victorian era thriller has been thriving ever since.
Monday night at 8 there's a n elongated two-hour edition called A Merry Murdoch Christmas.
The guest stars include Kelly Rowan from The O.C. and Ed Asner and Downton Abbey's Brendan Coyle.
Watching it was a pleasure and a reminder we sometimes take this fine Canadian show for granted.
Certainly Outerbridge played the lead with a lot more anguish --0Bisson comes across as a suave leading man rather than the Catholic trapped in a Protestant city.
The women may seem a trifle too pretty for Victorian ladies --makeup and lipstick back  then was not allowed unless one wanted to be seen as a brazen hussy.
But the show has done an awful lot of hunting for original Victorian exteriors and interiors --when I was visiting I was told Hamilton often subbed as an appropriate historical location.
Tonight's installment A Merry Murdoch Mystery is a bit on the ghoulish side for this time of year --the sighting of a mad monster with horns might give younger viewers nightmares.
But Michael McGowan's direction is sprightly enough and most of the bases are covered as Yultide entertainment including a look at what were deemed appropriate gifts for children in those days.
Asner is in fine form as Kris Kringle who may or may not have actually stolen a cache of children's presents to give out as his own.
Rowan is the suddenly widowed wife of a large magnate apparently murdered with a host of suspects as he was universally hated.
One oddity has a little girl named Mary Pickford entertaining an audience and while it is true "little Mary" was born in Toronto in 1892 and lived on University Avenue I'm not so sure she'd still have been in the city after 1900.
But it's a good touch, I can't actually argue with that.
The amalgamation of murder mystery and Christmas celebration is an uneasy blend but fans of the show should keep watching until the end.
The amount of snow in the outdoor scenes leads me to believe it must have been filmed last winter --we've hardly seen the white stuff this year as yet. Am I right.
When one thinks about it the fact that Murdoch Mysteries has been Shaftesbury Films's longest running hit is a bit odd.
After all Shaftesbury also made TV's Joanne Kilbourne mystery movies with Wendy Crewson which one would have thought might have been easily transferred to weekly TV but nothing ever happened.
And as Crewson told me the last time we spoke:"That train has left the station."
So let's continue to celebrate Murdoch as an example of a well made home grown series on all fronts in an era when quality Canadian fare is fast disappearing from Canadian TV.
A VERY MURDOCH CHRISTMAS PREMIERES ON CBC-TV MONDAY DECEMBER 21 AT 8 P.M.
MY RATING: ***1/2.

We love the series!!! Hubby and I are in Indiana of the USA and watch and rewatch episodes we get here, we can hardly wait to get past season 8 and hope for 8 more !!!! great tv !!!! fun to rewatch many many times.