The Great Human Odyssey: TV To Shout About 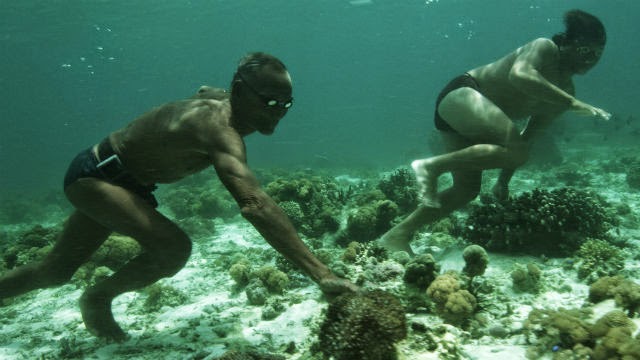 The latest Nature Of Things mini-series The Great Human Odyssey is about as good as TV gets.
It's the kind of broad spectrum show that TV networks once used as prestige items before ratings erosion began eating away at the very existence.
So watch this one as an example of how demanding as well as entertaining TV can be when all caution is thrown to the winds.
Because this three-episode "mini" was photographed all over the place from the Kalahari desert to Papua, New Guinea to the frozen Siberian wilds.
Never once in previewing of the first two hours did I ever want to turn away for even a second.
In fact I'd like to watch a second time if only I had such a permissible schedule.
I'm thinking of TV events of the past like Civilisation when I say this one has sweep, scope and some of the best photography you'll ever watch.
The amiable host is pop anthropologist Niobe Thompson who has the ability to take great themes and make them understandable with spectacular images to accompany each thought.
The theme is simply this: where did homo sapiens come from and how on the verge of extinction did our ancestors  evolve and persevere to populate the world.
Whew! What an undertaking. But I watched in awe as Thompson again and again met his goals
and did so with such charming enthusiasm.
Thompson says these modern humans adapted to totally different environments and were able to reproduce fairly rapidly as opposed to their arch enemies the Neanderthals who got swept away in Europe by the Ice Age.
In the first hour Rise Of The Species Thompson has to explain why the species survived a particularly horrid set of climactic changes and were able to vault out of the Kalahari desert and into new regions .In others words why are we the last apes standing?
So he hangs out with Kalahari bushmen to see how they can survive in a region where iy does not rain at all for nine months of the year.
On the very edge of Africa he finds clues why our brains were growing --it might have been all that seafood consumed.
And what about the evocative rock paintings some 90,000 years old --already we were communicating with each other or so it seems.
Highlight of the episode is a visit to the remote Badjao tribe of the southern Philippines --how they live off the ocean floor makes for some of the greatest underwater photography I've ever seen.
In next week's episode The Adaptable Ape there's a simple explanation for how early humans got past the Sahara to colonize Europe.
Thompson travels deep into Papua New Guinea's Upper Sepik tio find a tribe virtually immune to malaria --perhaps our ancestors mated with Neanderthals and survived similar European plagues.
Look ---this is a very ambitious series, a scientifically impeccable study of how primitive cultures of today can offer clues about the survival of the human race.
It is also brilliantly shot by Daron Donahue, aAron Munson and tightly edited (Clearwater Documentary Inc. made it).
Yes, there are talking heads here but they are not allowed to meander, what they're saying is frequently exciting.
Omnce TV events like The Great Human Odyssey used to be commonplace on CBC and PBS but these days are endangered species themselves. Costs are prohibitive and there are so many competing channels offering cheap, stupid programming.
Here's an example of how great TV can be when it rises to the occasion.
PART ONE OF THE GREAT HUMAN ODYSSEY PREMIERES ON CBC-TV THURSDAY FEBRUARY 12 AT 8 P.M.
MY RATING: ****.