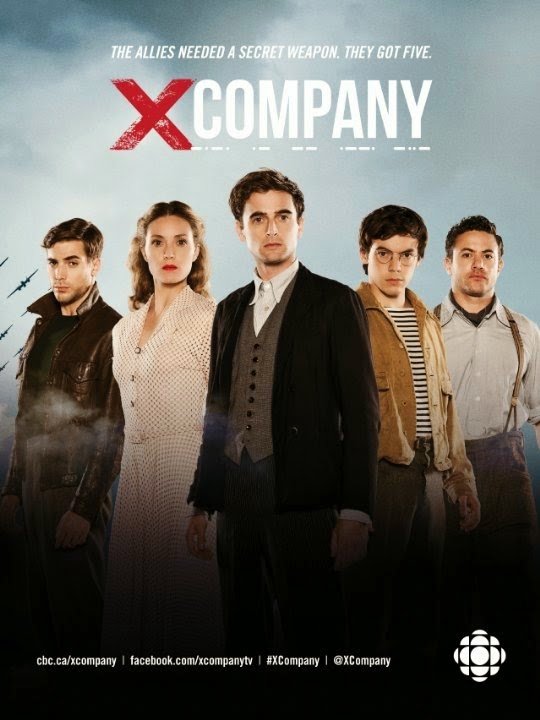 Thank goodness few Canadian rely on TV for any knowledge about their country's past.
Canadian TV dramas these days are carefully crafted to seem as American as possible when exported to the U.S.
So it's with a cheer that I herald CBC-TV's new Canadian spy series X Company which dramatically details the exploits of our spies during World War II.
The new hourlong drama which debuts Wednesday February 18 at 9 p.m., is exciting stuff. And it's all true, too.
Set on the shores of Lake Ontario between Whitby and Oshawa Canada's Camp X was a high quality spy facility that trained operatives to operate behind Nazi lines in France and other occupied territories.
Hundreds of well trained spies graduated from the camp and many were parachuted into danger zones where they might be tortured and killed if their true identities were ever known.
Starring is Dustin Milligan (90210) as American advertising executive Tom Cummings --his expertise in manipulation makes him a prime member of any operating team.
Co-starring is Evelyne Brochu (Orphan Black) as Aurora Luft --she is a Jewish French Canadian who joined the French Resistance first and only later received training at Camp X.
Youngest agent of the bunch is Harry James (played by Connor Price) who is both an explosives expert and crack radio operator.
Hugh Dillon (Flashpoint) plays Duncan Sinclair the tough leader of the camp.
Lara Jean Chorostecki plays the leader of the telecommunications center --all young women.
Shot in three months in and around Budapest, the series was created by Mark Ellis and Stephanie Morgenstern who are responsible for the must see Canadian show Orphan Black.
First of all X Company is shot in a seamless style that does not portray the Nazi as all unfeeling.
We see the psychological results of  being defeated on the faces of the French villagers.
If they do not cooperate they could lose their children --the young French girls servicing the German officers at the occupied chateau do not know what to do, they are caught in the middle.
We see this ambivalence perfectly in a French family temporarily captured by the Canadian spies --the father is willing to go to any lengths to cooperate with the Nazis even to the extent of "naming" possible neighbors who may be helping the spies.
Some ket scenes are done from the German perspective --the Nazis are aware they're without many supporters in a village that may be crawling with partisans.
Some try to make friends with the pretty  maids while others vow to shoot little children if that will get them the necessary information to survive.
The Canadian saboteurs have been dropped in to disrupt supply lines by bombing key bridges. They understand that only by working as a team do they have any chance of survival.
And yet picked for a key role is Alfred Graves (well played by Jack Laskey) because he has the uncanny skill of instantly remembering everything he has read.
X Company crackles with tension and the professionalism of a finely made series --David Frazee directed the first episode with some elan.
Here's something rarely seen on Canadian TV: homegrown drama you'll actually want to see.
X COMPANY PREMIERES ON CBC-TV WEDNESDAY FEBRUARY 18 AT 9 P.M.
MY RATING: ***1/2.