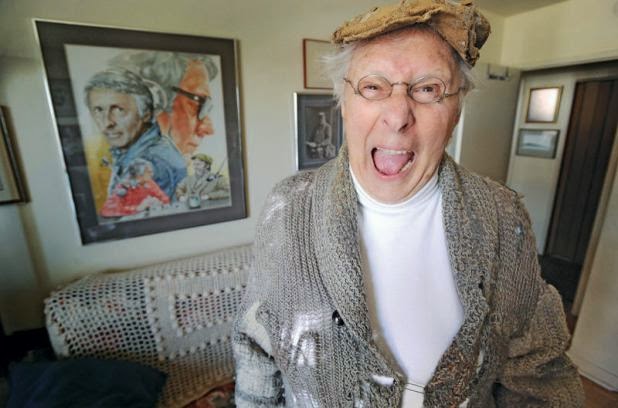 I was fortunate to meet and interview Don Harron on several occasions during my decades long run as a TV critic.
Harron died age 90 on January 17 after a great career as a noted satirist.
He occupied a special berth: here was a bona fide Canadian TV super star but one who frequently
worked on American TV in the hugely popular long running hit Hee Haw.
The last time we met was about two years ago at salute to the late great Roger Abbott co-creator of RCAF.
Harron was part of a mob of fans who thronged into the old TTC barns on St. Claire Avenue West to pay his respects. Then he was forced to stand for several hours of tributes --for some reason no chairs were provided.
And this was a very elderly crowd --it was also the last time I spotted Knowlton Nash and there were many other "grey hairs" among retired CBC publicists and backstage support.
Harron then in his late 80s was bright enough to remember the first time I'd interviewed him in person,
It came right after his debut program as host of CBC Morningside which he ran beautifully for a five years stint before Peter Gzowski took over.
I remember at that interview way back in  1977 I kidded Don I'd just interviewed his old movie co-star Martha Hyer in Los Angeles.
Don Harron as a movie matinee idol?
That's what 20th Century-Fox had in mind by pairing Harron and Hyer as office lovers in the 1959 movie soap opera The Best Of Everything.
But the movie was so jam packed with stars including Joan Crawford, Suzy Parker, Louis Jourdan, Diane Baker and even Robert Evans (later a top producer) that one segment had to be considerably trimmed.
"If you blink you'll miss me," joked Harron when I reminded him of his strangest ever credit.
Another strange Harron credit: in 1973 he was one of the stars and creators of the TV satire Shh! It's The News which Global TV picked up when it went on the air.
When the network faltered all its Canadian shows were cancelled --Harron was starred in this merry satire with Barbara Hamilton, Jack Duffy, wife Catherine McKinnon and he later told me it contained some of his best work.
The second time we met was maybe 20 years later when Harron was planning a summer theater tour of the play. Mass Appeal.
"People don't know I really can do drama," he groused at a lunch that included the proposed director-producer John Aylesworth.
Aylesworth created CBC-TV's most popular ever series Front Page Challenge but never received the credit because he was an in-house producer at the time.
But together with his regular partner Frank Peppiatt he created Hee Haw which starred Harron and was a top ratings getter for CBS for two seasons before going into decades of first run syndication.
"What those two did was meld the farm humor of Petticoat Junction with Laugh-In and the profits just rolled in," laughed Harron.
"It ran for 585 episodes over 22 years. I'd be mobbed every time I stepped off a pane in any U.S. city"
Each season was made in about three weeks. "I'd do Charlie Farquharson stuff for days on end and it would all be cut into snippets and it looked like a million dollars. Everybody had to be on it: Minnie Pearl, Grandpa Jones, Roy Clark, Buck Owens, Lulu Roman, and my Canadian pal Gordie Tapp."
When I told Harron I liked almost as much another of his comedy creations Valerie Rosedale he clapped his hands and said "Me too!"
Perhaps most lasting of all there is the continually running (every summer) revival of the musical hit Anne Of Green Gables which Harron co-wrote with Norman and Ekaine Campbell and Mavor Moore.
Harron said when friends grumbled about being stuck in old age mode he'd yell at them "Get a walker and get on with it."
Which is precisely what Don Harron did his whole career : he got on with it.

Inspiring! Thank you for this! xoxo AMS