A Fond Farewell For Justified 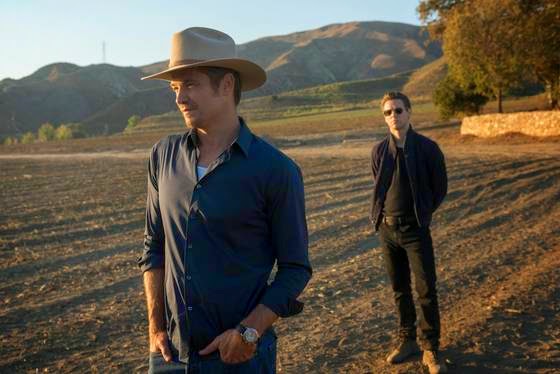 The best thing about the wonderful U.S. cable drama Justified is how deliberately slow the dramatic proceedings usually are.
One of my favorite American imports begins its sixth and final season on Super Channel Tuesday January 27 at 10 p.m.
Of course if you watched last season you could spot the finale coming as U.S. marshall Raylan Givens (Timothy Olyphant) goes after his best bud from childhood ace criminal Boyd Crowther (Walton Goggins).
Well, I'm not giving away much by saying Sam Elliott no less is the new danger to be faced but he won't amble into place until the third episode.
See, that's Elmore Leonard's style story telling.
Every episode is jam packed with the craziest characters you'll ever expect to meet and all of them played by actors who seem right at home in the land of sagebrush and coyotes.
I just  happen to consider Justified FX's most satisfying hour drama which is saying a lot.
But nobody connected with this one is simply out to garner publicity --they're all assembled to tell the story as well --and as slowly-- as they can.
I once sat down with Oyphant in a Toronto screening room to talk about his greatish work on HBO's Deadwood.
And there he was starring in the most talked about new Tv series of the season and he didn't really want to be there.
He'd walk down a Toronto street and heads would turn because everyone was watching the show.
But nobody seemed to know his name and that's the kind of priceless anonymity an actor craves if he wants a long career.
Besides Elliott there's Garret Dillahunt as his menacing surrogate. And just what is Mary Steenburgen up to anyway--she seems to want to help Boyd rob a bank or two.
No wonder a Southern family I know positively hate this one --it mocks every facet of deep fried Southern gentility.
Of course the real shocker here is the "executive producer" credit given to the late great Leonard. He passed away two years back leaving a magnificent legacy.
And I'm also watching because the show runner is Graham Yost, son of the first guy I ever interviewed when I became a TV critic in 1970--the late, great Elwy Yost.
If I had a beef with season 5 it had to be the plot got too twisty.
And that's perfectly OK in a conventional TV drama but this one is special. The simpler Justified is the better.
If anything Season 5 had too many baddies --the atmospheric details tended to get lost in the background.
This time out it's back to Plan One: Raylan versus Boyd which is fine by me.
Look for some great scenes from Joelle Carter early on as Raylan's informant but one stuck on Boyd-- she shines in all of them.
All of which has me wondering why Justified has to die off after this season.
THE SIXTH SEASON OF JUSTIFIED PREMIERES ON SUPER CHANNEL TUESDAY JANUARY 27 AT 10 P.M.
MY RATING: ****.