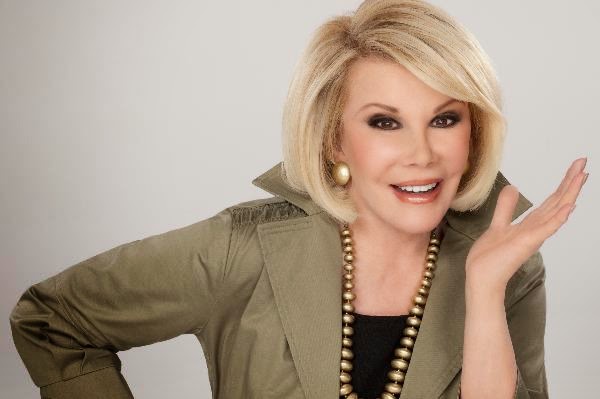 I'm trying to recall the year I was assigned by The Toronto Star to profile great stand up comedienne Joan Rivers.
Rivers was in town promoting her jewelry on the Home Shopping Network --a task she would later abandon when she became hot again on TV's Fashion Police.
And one of her best buds, Brian Linehan, was still around because we talked about his great ordeal in coping with the recent suicide of his partner.
So I'm guessing the time was somewhere in 2002, in the summer and at Toronto's Four Seasons hotel.
Linehan had given me a lot of background information on Rivers but I still was surprised how nice and open she was to me.
And there was the almost complete lack one line liner zingers --Rivers instead emerged as bright and articulate --and very well read.
She kept glancing at a pile of new books she had just bought from Yorkville's Book Cellar and predicted she'd be through reading them by the time she left Toronto after a wild weekend of appearances promoting her baubles and beads.
From time to time she'd wave at her "toyboy" who actually was a sedate gentleman with snow white hair who looked way over 80. He dozed in a recliner only occasionally listening into our conversation.
First up Rivers calmly and precisely talked about husband Edgar's suicide in 1989 and said she'd never seen his depression coming.
"That's what I told Brian who was naturally distraught. There are no symptoms unless one is earnestly searching for them."
Around this time, Rivers, then 69, was what she frankly called a "downswing in my career. When I pass all the obits will describe me as a Borscht belt stand-up."
These days younger viewers know Rivers best of all for her stint as host of Fashion Police (produced by daughter Melissa) --Rivers' one liners were not spontaneous but written for her by her talented team of writers.
Rivers would have them typed on index cards and be madly flipping the cards during each hour special.
A young kid who once wrote a humor column for the Sunday Star subsequently moved to L.A. to become a top comedy writer for Bob Hope and Joan Rivers.
"Joan was smarter and sassier than Bob and she'd take a line I'd written, tweak it and boy was it funny."
She was born on June 8, 1933, in Brooklyn, the younger daughter of Russian Jewish parents. She graduated with honors from Barnard College in 1954 and she worked as a tour guide at Rockefeller Center.
Her first time on stage? "I was a lesbian in the play Driftwood and I had a crush on an unknown actress named Barbra Streisand. I often wonder what happened to her."
I told her I'd recently watched her first TV appearance on You Tube --it was on the daily show Girl Talk  in 1965 --"oh yes and I told Virginia Graham I was constantly being mistaken for Woody Allen."
Johnny Carson took a shine to her and made her his permanent fill in guest host. Then Rivers did something that caused Carson to angrily hang up on her and never talk to her again.
"In 1986 Fox asked me to anchor my own talk show against Johnny. When I rang him up he was very angry thinking I had double crossed him and cut me off.  I've never been on the Tonight Show since."
The ban was only lifted recently by Jimmy Fallon.
The show was cancelled in 1987 and husband Edgar killed himself  three months later.
In 1989 she tried daytime with The Joan Rivers Show which lasted five years "but I couldn't stand it. Because it was on daytime I was given a book of all the taboo subjects I could not mention."
Joan Rivers, movie director? It happened in 1973 when Rivers directed Billy Crystal in the successful comedy Rabbitt Test.
"I was bored. So many takes. There were no other women directors around.  So I never made another."
A failed TV project was a remake of the classic play The Man Who Came To dinner with Rivers cast in the Sheridan Whiteside role but as a gabby female TV talk show host.
"We got into pre-production and then figured it no longer worked. These days they would air lift the injured star out of the small town and to an emergency hospital."
In 2000 Rivers virtually initiated the "Red Carpet" interviews first for E! and later for TV Guide.
When I met her she said she was making millions a year from her Joan Rivers Fashion Collection.
In 2009 she won Celebrity Apprentice donating all her winnings to charity.
I guess I last talked to Rivers on the phone when pal Brian Linehan died of lymphoma in 2004. She was distraught but said "It was his time."
But as Katie Courioc told her bluntly last season on TV Joan Rivers simply could not retire.
She was front and center on the reality series Joan & Melissa: Joan Knows Best?  The brilliant 2010 documentary Joan Rivers: A Piece Of Work showed her as a dedicated workaholic who was working as hard as when she was an unknown in the Fifties.
Rivers was always opren about her multiple facial procedures which I felt were excessive. Was she really an addict to plastic surgery, I asked her?
"Hell, yes, I'm just itching to get these drooping eye lids re-done!"
I thought of that conversation when I learned Joan Rivers had died after complications from seemingly routine throat surgery done by a New York city clinic.
I know I'll miss her and I'm glad she got back on top near the end.