There is a new Canadian TV season about to break although you'd never guess it by the waves of American series washing up at Global and City.
The term I'm using is "Pride of Place".
And it's CTV which gives pride of place to its hit returning Canadian series Saving Hope which revs up Monday Sept. 22 at 9 p.m.
CTV is "hammocking" the series right behind the best new American series Gotham and right before the season premiere of  Castle.
And the second installment runs Thursday Sept. 25 at 9 p.m. in a similarly protected spot sandwiched between producer Sondra Rhimes' returning ratings blockbuster Grey's Anatomy at 8 and her latest opus at 10 titled How To Get Away With Murder.
How's that for protected status?
CTV deserves high marks for sticking with the hospital melodrama --don't forget it ran for a few episodes its first season on NBC only to be quickly dumped because of low ratings.
In other days that would have meant quick cancellation at CTV, too.
After all Global axed  Combat Hospital after ABC ran it for a summer and then killed it off.
And the same fate befell Global's legal drama  The Client --which NBC moved to Saturdays and then declined to renew it.
CTV is running six new episodes of Saving Hope this fall and will then run another 12 hours in 2015 with date and time still to be decided.
Last year the show ended literally with a bang as comely lead Dr. Alex Reid (Erica Durance) was stabbed in the heart by a mentally ill patient and seemed about to die.
How do I know this?
Because she had the same out of body experience as experienced by her  boyfriend who kept seeing ghosts all the time after his near death car crash.
I've watched the first two new episodes but my oath as a TV critic prevents me from spilling the deep, dark secrets.
Relationships --that's the key to the show's success which was also the key to Grey's Anatomy.
Here, the personal sides of the docs is examined front and center and what a handsome bunch they are.
Every female doctor is gorgeous and every male doctor sturdy and handsome.
Whereas when I had a recent heart episode I met a bunch of doctors who were balding, obese, distracted and sometimes out of sorts.
I never met a female doctor among them certainly not one as young as beautiful as Durance --my docs were aged 55 and older with decades of experience which somehow comforted me.
And the hospital I was at was crumbling at the seams as opposed to Hope Zion where all the equipment is brand new and funding problems do not seem to exist.
In the first new episode "Heaven Can Wait" Dr. Reid battles for her life aided by her desperate lover Charlie (Michael Shanks) and his ex who also happens to be a surgeon and is played with surly scene-stealing charm by Michelle Nolden.
Let's not forget Daniel Gilles as Alex's former lover Joel. The second new episode introduces new gynecologist Sidney Katz played with wisecracking charm by Stacey Farber.
I remember times spent with producer Ilana Frank on her CTV series The Eleventh Hour which never make that all important U.S. sale.
However, her next Rookie Blue is still with us on both Global and ABC.
She's learned well the lessons of how to build an audience and hold it through many seasons.
SEASON 3 OF SAVING HOPE PREMIERES ON CTV MONDAY SEPT. 22 AT 9 P.M.  WITH PART 2 ON THURSDAY SEPT. 25 AT 9 P.M.
MY RATING: ***1/2. 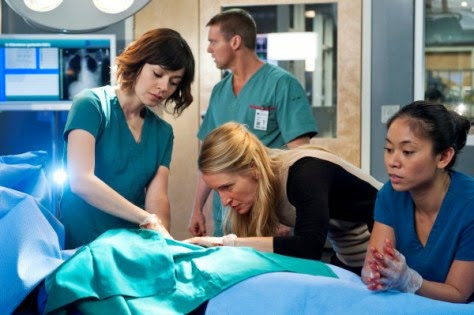