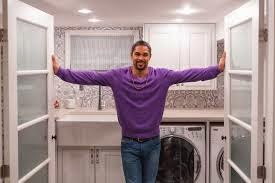 On Canadian TV the fall season starts early.
This week HGTV which is one of the success stories of Shaw Media unveils its new lineup.
At first I thought I'd never even heard of Tackle My Reno starring former CFL star Sebastian Clovis.
But it was announced in the fall lineup as Reno Rookies --the name change is for the better I think.
Clovis grew up in Scarborough, attended Neil McNeil High School and later Saint Mary's University and was a CFL star before retiring to become a reno specialist.
On Global's morning show he said that when he was 15 his parents had a contractor renovate their kitchen with the proviso he give their teenager a summer job.
And from that he learned the building trade from the ground up.
Now there are some HGTV series I like and watch and others I avoid.
Property Envy does nothing for me --I can't relate to the million dollar estates which all seem to be eyesores.
I stopped watching Property Virgins when amiable host Sandra Rinomato decamped.
Her subsequent series Buy Herself was a distinct disappointment and got cancelled after one season.
I wish Mike Holmes would expand his search somewhat and stop his fixation on mold.
Million Dollar LIstings has lot its luster for me although I'll still occasionally visit House Hunters despite its venerable age.
Which brings me to Tackle My Reno starring Clovis, 34, who has an amiable TV personality.
He's picked wisely on the first two half hours which debut Tuesday August 26 at 10 p.m. as a one hour block of programming.
For one thing he makes gentle fun with the rank amateurs who seemingly can't even hammer a nail straight.
Then he shows how a pro would do it.
The first episode looks at a husband who can never finish his basement renovation because he lacks the skills.
Clovis is pretty good at guiding him along and explaining all the processes and stirring things up with the fed-up wife --even the neighborhood children get in on this one.
And I felt the average viewer could relate to the narrative more than a million dollar listing.
The second half hour is even better as Kristine who is heavily pregnant wants a functioning kitchen before she gives birth. Husband Sam is obviously crazy about her but he just does not know how to re-jig the cramped space and provide the finishes in time.
Clovis gets Sam working and provides valuable backup as he provides a running commentary about each crucial decision he has to make along the way.
I'm not the only one who has noticed the crucial difference in HGTV's Canadian made shows and the American imports where selling real estate and closing the deal is the end all.
Canadian handyman offer life lessons in each episode and I know i'll be watching more episodes of Tackle My Reno.
TACKLE MY RENO PREMIERES ON HGTV TUESDAY AUGUST 26 AT 10 P.M.
'MY RATING: ***1/2.

Clovis is hilariously informative. Love how he manages to put his clients at ease while chucking poking fun at their amateur attempts. His references to the romantic relationship between couples is also cute. Somehow, he manages to charm the ladies without offending the men - neat trick.