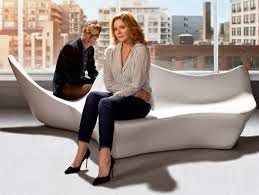 Kim Cattrall was supposed to phone me to chat about her new HBO Canada series Sensitive Skin.
But she was momentarily lost for words when I explained I'd interviewed her once before.
"It was in 1979 and you were co-starring with Brent Carver in the CBC TV movie Crossbar, a wonderful film for adolescents about a teenager who loses a leg but still wants to be a high jumper.
"I remember the day I was on set also chatting up Kate Reid and John Ireland and director John Trent who I'd first met on the set of Jalna."
There was another awkward moment of stillness and then Cattrall said "Fine. Thanks. Now let's talk about Sensitive Skin."
In the six-part miniseries Sensitive Skin Cattrall is still out there shining away in a brilliant piece of Canadiana.
"It only took me nine years to get to this TV premiere," she says with a nervous laugh.
Nine years ago Cattrall was co-starring in a London play when she met British screen writer Hugo Blick who had written Sensitive Skin as a British TV vehicle for Joanna Lumley and Jonathan Miller.
"We talked about me doing something of his. I kept going back to this very dark series which I thought could translate to North America very well.
"But the way things proceeded it took this long."
To shepherd the Canadian production veteran Don McKellar stepped in both as director and co-star and his frequent writing partner Bob Martin rewrote the scripts (for Rhombus Media).
"It's considerably changed," Cattrall says. "Friends who have seen it call it a dramady. I'm skeptical. There's too much comedy. But it's certainly not a sitcom either."
Everyone in SS is slightly disfunctional but in a comedic way. Cattrall, 57, is Davina who has been married for 30 years to steadfast hypochondriac Al who writes a trivial sort of column for the Toronto Reporter.
Feeling hemmed in they have sold their comfortable Forest Hill home for a brand new condo in downtown Toronto --the interior is all spanking white and Davina's first purchase is the most uncomfortable white sofa anybody can imagine.
In March 2011 Cattrall made headlines when she lashed out at a New York Post reporter at the premiere of her new film Meet Monica Velours.
"Ask me what it's like to be 54 and marginalized. It doesn't get easier as you get older."
Cattrall praises the Toronto centricity of the series --for once T.O. does not stand in for some vague American city.
"People have told me they feel like this couple. They moved downtown because Toronto is all condos these days. And it's not what they imagined. Transportation is iffy, there's noise, street people, it can be dangerous at nights."
All this gets dramatized in Sensitive Skin and Cattrall reports "It was truly satisfying being Davina. She has a lot of layers."
Cattrall says "It's not like we had a ton of money to spend. Don keeps the same crew and they work on a sort of short hand. I'd break for tea and they were all ready for the next set up. We'd do a few takes and then move on again. It's all on film --that explains the sheen.
"And yet the look is luxurious. Their apartment was the only big set, it is a character in itself. No wait! The couch is truly a real character."
Other characters include their 30-year old son who remains a perpetual adolescent and blames his low sperm count on his impending divorce.
Then there's brother-in-paw Rogers (Colm Feore), impossibly successful at high finance until he seems to begin flirting with Davina.
Davina plays out her midlife crisis with a piano teacher cum amateur archaeologist Grey (Marc-Andre Grodin).
In one episode both Davina and Al have encounters with friends from long ago.
Davina meets a girl who hero worshipped her in high school and always thought she's emerge as a big movie star. Turns out the ugly high school friend has morphed into one of Toronto's top neurologists.
Al meets an old flame wonderfully overplayed by Mary Walsh who invites him on her radio program where he over prepares and winds up berating her on air.
In several sessions Al is both comforted and teased by his neurotic doctor played wonderfully by Elliott Gould.
"In the original it was  Jonathan Miller and he was far more dark and menacing."
Also outstanding: Joanne Gleason as Davina's older sister Veronica and Cle bennett as erudite drug dealer Theodore.
Cattrall says "We felt at the end we'd made the equivalent of several feature films."
To economize block shooting was used --all the scenes in the apartment were shot one after the other --it was the same with the visits to Davina's art gallery or the doctor's office.
"You had to be on your toes," is the way Cattrall sums it up.
"We wanted the characters to be entirely recognizable. The humor comes through in the brilliant writing."
Cattrall is right in thinking Sensitive Skin is so different it takes some time to get used to its gentleness and sense of perspective.
But the full season will be available to subscribers following the broadcast premiere --a first for Canadian TV.
Subscribers will also be able to watch Season 1 of Sensitive Skin on TMN GO, Shaw Go Movie Central app, Bell TV app, Telus Optik on the go and via on demand platforms.
SENSITIVE SKIN PREMIERES ON HBO CANADA SUNDAY JULY 20 AT 8 P.M.
MY RATING: ****.