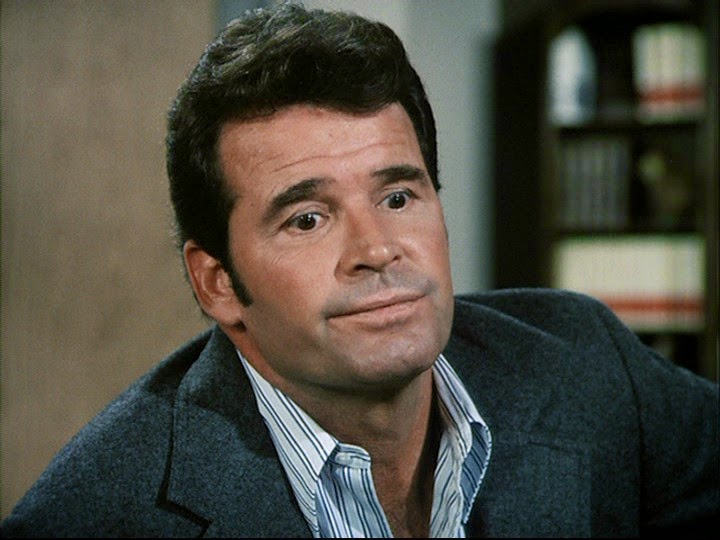 It was very early in the morning, June 1976, and I was dashing into my hotel room at the Century Plaza hotel.
I could hear the phone ringing and on the line was the determined publicist for MCA, his name was Zane Bair,  that I remember.
"You have a luncheon date with Jim Garner on the set of Rockford Files, on the Universal lot at 1 p.m. Please be on time. I'm sending down a pass for you to get in through the main gate."
I'd been trying for an interview with Garner but always got turned down with the added message "Please try next time you're in L.A."
This time it worked and precisely at 1:05 I arrived at his massive trailer to find Garner and producer Meta Rosenberg already munching on their salmon salad sandwiches.
At the same time a studio nurse was dressing a bruised knee. Garner loved to do his own stunts --later he had to have both knees replaced and underwent quintuple bypass surgery after decades as a chain smoker.
That lunch marked the beginning of a beautiful friendship.
Because Garner approved of the first story I got to interview him again --this time in the Toronto Star news room where he was filming the 1984 CBS TV movie Heartsounds co-starring Mary Tyer Moore.
"Hey, Mare, you come over here and meet this young chap," Garner yelled when Moore got skittish.
In fact as I recall she agreed to be photographed opposite The Star's managing editor Lou Clancy. And the front page headline the next day was right on: "Mary? Lou?"
In 1985 Garner and I hid out on a vast soundstage for the press party for the TV series Space. "I did agree to be interviewed but I never said how many reporter that entailed," he quipped.
And in 1993 I interviewed him on the phone for the last time for his latest TV flick Barbarians At The Gate.
Yes, Garner could be very open and amiable --just so long as you didn't cross him. Then his famous temper would explode and how.
After Rockford Files went off the air in 1980 Garner discovered to his intense annoyance the series was listed in the studio books as having made no profit because every possible service was downloaded as expenses including garbage delivery.
He never talked to Rosenberg again just as he broke off with Mariette Hartley although they had made a series of pleasing commercials for Polaroid.
Garner's big claim to fame was his position as one of the first TV super stars to jump successfully into movies.
That day in his star trailer he reflected on the theory that "I was told a TV star cannot become a movie star. Vince Edwards didn't make it. Mary Tyler Moore tried and failed. Richard Chamberlain is a wonderful actor but not a movie name. Then along came Steve McQueen, Clint Eastwood and yours truly and that barrier got broken down."
Garner's first claim to fame was the western TV hit Maverick --he made 60 hour episodes between 1957 and 1960. "Each took so long they had to bring in other actors. Sometimes they'd be shooting three episodes at once. Jack Kelly played my brother and for awhile Roger Moore was the English cousin Beau. I started out at $400 weekly and eventually made $800. Chicken feed but I was learning the ropes."
During his summer hiatus Garner made modestly budgeted actioners for theatrical release: Darby's Rangers (1958), Up Periscope (1959), and Cash McCall (1960) opposite Natalie Wood.
What changed his status? "The Great Escape in '63. A huge hit. Then I did two with Doris Day (The Thrill Of It All and Move OIver, Darling) --she did her own pratfalls, we had a blast. Then came my favorite picture The Americanization Of Emily. "
In 1971 he jumped back to TV with the western Nichols. "Oh, so you're the one person who watched it. I thought it was great but we only lasted 24 episodes."
The Rockford Files lasted 1974-1980 or 122 episodes although Garner reluctantly returned to the character in six TV flicks made in the 1990s.
Then came more TV series: Bret Maverick (1981-82), Man Of The People (1991-92), God, The Devil And Bob (2000-01), First Monday (2002) and his last-- 8 Simple Rules (2003-05).
I happen to think his best performance came in Murphy's Romance (1995) but he also shone in The Notebook (2004).
His strangest credit? He made half a movie in Canada in the 1980s and then departed when financing ran out telling me years later "It's been so long I don't even look like that anymore so it can't be finished."
Asked how he'd like to be remembered Garner grinned and said "As an actor who loved to work with smart people I could learn from. On the other hand Sally Field says to this day I'm her favorite kisser and that's quite a compliment."
In later years Garner battled back after a stroke and arthritis attacks. He died at his L.A. home July 19 2014 aged 86 leaving behind wife Lois and one daughter.