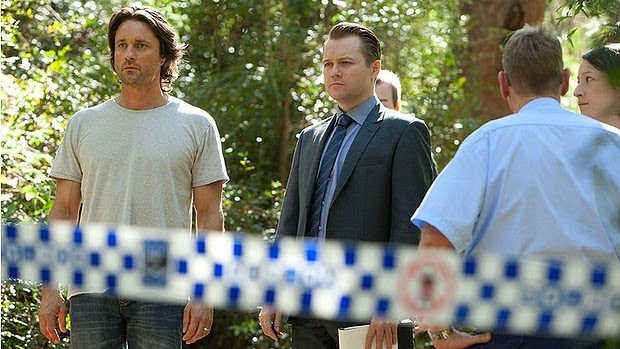 Way back when --in the early 1970s when I was the boyish TV critic of The Hamilton Spectator --CBC-TV used to show buckets of Australian and British TV.
Back in those days an hour of Commonwealth TV counted as a half hour of Canadian content but eventually CRTC changed the rules and Commonwealth TV fare quickly disappeared from Canadian TV screens.
So it's surprising to catch the new Australian mystery import Secret And LIes which debuts on CBC Monday July 7 at 9 p.m.
As I watched the opening hour I was reminded of the recent British hit Broadchurch which already has been made into a U.S. mini-series.
And I'm pleased to report Secret And Lies has been bought by ABC for its own instant remake --I don't have a release date as yet.
Martin Henderson stars as Ben Gunderlach who is on his early morning run in an a leafy suburb  of Brisbane--it is so early that he can barely see where he is going.
And then he comes across the murder of a young boy who lived on the same street --Thom Murnane.
The acting is nothing sort of exceptional including Henderson, Adrienne Pickering as the boy's distraught mother and Damon Gameau as Ben's slacker mate.
Because much to Ben's amazement the police immediately figure him as the probable killer.
The details of how he came upon the body keep changing a bit.
And he and his wife have determined to separate after the Christmas break even though they still share the same bed.
The Brisbane location is unusual enough to hold the interest --just down the street from Ben's house is a gully that seems part of a jungle.
Set in December the atmosphere is undoubtedly human --everybody seems to be perspiring profusely.
Stephen M. Irwin wrote the script which works on various levels --there are a number of people who clearly could have killed the boy.
With Ben there is simply a lack of motive unless something is being hidden from viewers. And the narrative is seen through his eyes --in Broadchurch there was the visiting detective (so well played by David Tennant) who unravelled that mystery.
Secrets And Lies indicates Australian TV is reaching out to fashion some mysteries of its own rather than always buying abroad.
Canadian TV has made a few attempts over the years notably Wendy Crewson in a CTV movie series about investigator Joanne Kilbourn and farther back on CBC Saul Rubinek starred as St. Catharines detective Benny Cooperman.
Perhaps CBC should have stuck with Cracked which was coming along quite nicely after a rocky start?
And maybe the CRTC should think about re-jiggling its Canadian content quotas again to let in more quality Commonwealth fare?
SECRETS AND LIES PREMIERES ON CBC-TV MONDAY JULY 7 AT 9 P.M.
MY RATING: ***1/2.