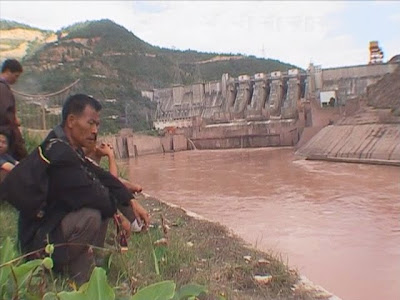 With all the chatter in Ottawa these days about the future of the CBC along comes a brilliant new documentary that fully justifies the Corporation's continuing existence.
Directed by Vancouver film maker Gary Marcuse and narrated by David Suzuki Waking The Green Tiger has its TV premiere on The Nature of things Thursday night on CBC-TV at 8 p.m.
It's quite unlike any other recent documentary on China in that it penetrates beneath the official government censorship to show how peasants in a southern part of China stopped the construction of a gigantic dam in "Tiger Leaping Gorge" in the Upper Yangtze River.
Marcuse's team enjoyed incredible access to the beleagured peasants of the valley and to the green activists who were egging them on to try to stop construction.
The hour blends in perfectly with Marcuse's two other films on environmental concerns. The first Nuclear Dynamite copped a Gemini with its look at the wacky idea of building a new Panama canal using nuclear explosives.
The second Arktika: The Russian Dream That Failed looked at the emerging Russian green movement sparked by fears of nuclear contamination from submerged Russian submarines in the Arctic.
"I was surprised at the level of government cooperation we got on this one," Marcuse tells me on the phone from B.C.
"I think it's because the green movement is seen not as a political problem but as a source of genuine concern for everyone. The premier had even expressed misgivings several times about the plan to build so many new dams on the Nu River and the Upper Yangtze.
"The passing of new green laws encourages people to express their concerns which certainly was not the case just a few years ago."
The production has already won an award as Best Canadian documentary at Toronto's Planet In Focus film festival and was listed as one of the Top Ten Canadian films at the Vancouver International Film Festival.
Marcuse says the Canadian contingent was small --just him and cinematographer Rolf Cutts-but he needed the cooperation of key Chinese green activists in telling the story correctly.
Some of the images are breathtaking --of the lush river valley and the industrious farmers.
"The landscape is simply stunning,"Marcuse says with some awe. "It's a big tourist center."
Government plans called for the displacement of 100,000 people and the complete flooding of 265 kilometers of the upper Yangtze.
Marcuse has compared it to flooding the Fraser river from Vancouver to Hope.
There are some great moments when local farmers board a bus to visit displaced villagers up the river and see for themselves what "progress" means. All over China a staggering total of 16 million people have been displaced by government dams.
"At first they're just happy to be on this trip, many had never been outside their valley. Then doubts set in by what they see."
Farmers in the relocated region now must root through garbage dumps to recycle glass bottles. They say they can't survive on the meagre compensation packets and many are dressed in rags. The villagers return with a renewed determination to fight the government bureaucrats.
When surveying posts are spotted in their fields the posts are quickly torn down. And the villagers meet and discuss ways for peaceful resistance which eventually does succeed in the delay for many years of the dam.
When I say many villagers do no look Chinese he says "There are many ethnic minorities there, many Tibetans and others. The valley was always a meeting spot for traders from different regions."
Everything the environmentalists are doing today runs counter to the pronouncements of Chairman Mao in 1958 as he urged his Great Leap Forward. What Map was really urging his supporters to do was wage war against the environment.
Archival black and white footage shows enthusiasts killing off the sparrows because Mao said they ate too much grain --but the birds also ate insects and without them great swarms of locusts resulted in massive crop failures in 1958 and 1959.
Marcuse even gets a typical Chinese couple of today who remember the starvation to wonder ironically why Chairman Mao so hated the sparrows --it's a great touch.
Today the green movement booms in China. Marcuse says his official government contact --his "minder"-even arranged an exclusive last minute interview with the former head of China's environmental protection agency Qu Geping who in a remarkable candid talk admits major mistakes were made.
Qu explains how environmentalism was allowed to sweep through the nation and how the government actually cooperated with the acitvists as long as they remained apolitical.
Marcuse says one inspiration was green activist Shi Lihong who graduated from film studies at Berkeley and had made a 20-minute film about the problems in the Upper Yangtze.
She emerges as one of the movement's heroines for sure.
For the moment Marcuse wants to get his film accepted for the Sundance festival. Already copies have gone viral in China and who knows some day might even be shown on government TV.
NOT has a 44-minute version and Danish TV bought a 56-minute one. The movie version runs 78 minutes so Waking The Green Tiger is reaching audiences in all sorts of ways.
WAKING THE GREEN TIGER RUNS ON CBC-TV'S THE NATURE OF THINGS ON THURSD. DEC.1 AT 8 P.M.
MY RATING: *** 1/2.
Posted by james bawden at 11:00 PM