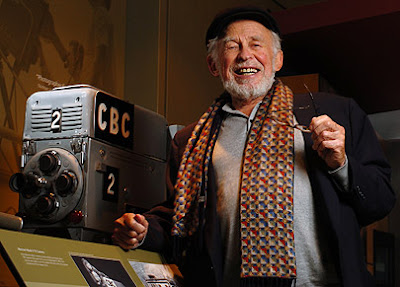 It's been a rough fall for Canadians who actually like to watch Canadian TV.
Wall to wall American series prevail even on nominally Canadian networks.
But a friend at a party this week told me she's going to retaliate by buying books on Canadian TV and Canadian DVDs as Christmas presents this year.
Good luck!
I've been trying for years to get our local networks to put more stuff up on DVDs.
Hear me out. I've always advocated a DVD package of the "Best Hits" from CBC's iconic Front Page Challenge.
In a three disc set one could get all the news makers from Martha Mitchell to Lord Mountbatten to prime ministers St. Laurent, Diefenbaker and Trudeau. Every high school would want a box set.
For years I pestered CBC to do up a DVD collection of Juliette's best programs. Too expensive I was told --the grainy kinescopes would have to be remastered.
But I still think it could be done --I'd add Brian Linehan's hour interview with her done about 15 years ago and I'm betting nostalgic viewers would snap it up.
CBC bureaucrats would always sniff and state they were not in the entertainment business.
Why aren't Norman Campbell's superbly staged TV ballets available? And what about those "Raskymentaries" --the 90-minute profiles of greats from Chagall to Raymond Massey --offered up every year or so by Emmy winner Harry Rasky.
I've also tried to get Elwood Glover's best ever interviews from Luncheon Date out there. No luck so far but remember Glover interviewed every great who was touring in a play --Helen Hayes, Virginia Mayo, Douglas Fairbanks Jr. At the time his live series came from the basement of the Four Seasons hotel on Jarvis St. across from CBC's Kremlin.
One CBC dramatic gem was the series A Gift To Last with Gordon Pinsent --it's not on DVD but I once saw it being rerun in Ialian on Telelatino.
I've long been convinced CBC's current team are not even aware of the TV jewels hidden away in their musty vaults.
In recent years Intelligence got a DVD release and remains a must-see. And the first two (of three) seasons of This Is Wonderland came out on DVD.
Current CBC product including Heartland and Little Mosque On The Prairie are available,too.
The same can be said of CTV. When Lloyd Robertson retired as anchor CTV should have produced a best moments compilation which could have sold in all the supermarkets where I see mediocre American shows relentlessly hawked.
Here's a list of the CTV series I covered with on-set interviews: Half The George Kirby Comedy Hour, Stars On Ice, Headline Hunters, Definition, The Pat Paulsen Show, Pig "N Whistle, Rolling Down The River, Simon Locke M.D.
Do you really want to see any of these oldies? I 'm just asking.
But later on CTV had some respectable hits including ENG which has never gotten a DVD release.
When TVO first came on in 1971 I sat down and reviewed its first big new series --a homage to Shaw featuring choice interviews with the likes of Dames Wendy Hiller and Sybil Thorndike. I've never been able to find it since.
One CHCCH oldie is out there and selling like hot cakes and I'm proud to report I was the only TV critic crazy enough to go on the set of The Hilarious House Of Frightenstein.
But what about the CHC series I'm most asked about? Sorry, folks, but only a few choice episodes of the immortal Party Game remain --most of the tapes were recycled at season's end and the originals lost. But I do know player Billy Van did ferret out some of his favorites and these bootleg copies abound.
A later CHCH effort The Palace was tapped at Hamilton Place with Jack Jones as host and it might warrant a DVD release --guests included Ethel Merman and Ginger Rogers. At the end of each taping day the Canadian talent trotted out to do their acts which were spliced into the Canadian content version of the show.
One DVD owner told me he's even had requests for such cable fare as Paradise Falls and Kink.
And he does stock and regularly sells DVDs of Trailer Park Boys believe it or not.
Canadian books on Canadian TV are even harder to find.
There's been no biography of Juliette who at her heyday was drawing three million loyal viewers every week.
Ever big U.S. series seems to inspire an anthology with all the episodes duly rated and rated. But Canadian TV doesn't get that kind of exposure. Our entire system is stacked against home grown talent I'm sad to report.
But there is on Canadian book on Canadian TV that miakes a great Christmas present.
It's Air Farce: 40 Years Of Flying By The Seat Of Our Pants by Don Ferguson and the late great Roger Abbott who died before it could be completed. Veteran TV critic Bill Brioux has contributed some of the most interesting chapters and the whole thing has just been published in time for the Christmas rush.
Why can't other Canadian TV success stories be equally celebrated? I just don't get it.
Posted by james bawden at 10:46 PM

I thought it funny the other week when 22 Minutes (of Rob Ford pestering fame) did an 80s episode. The two main series they spoofed upon - Littlest Hobo and Thrill of a Lifetime - were CTV productions.
I'd be willing to buy a DVD set of Seeing Things or The Beachcombers (the years when 'Molly' was alive). Hangin' In? I've forgotten that series.