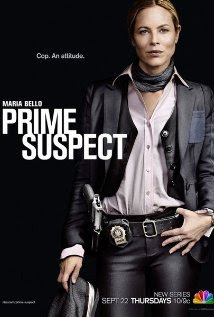 Look, things could not be any more dire for the fourth rated U.S. network, peacock proud NBC.
So the network is rearranging the deck chairs.
And the biggest concern is the sudden disappearance of Prime Suspect.
When Global TV rolled out its all American prime time the proud boast was the acquisition of the U.S. version of the Helen Mirren hit Prime Suspect.
Well, that just didn't happen.
Those of us who remembered the PBS original were aghast at the re-tinkering. And new viewers couldn't get around the basic unsympathetic heroine now played by Maria Bello.
In NBC's revamped lineup Prime Suspect is conspicuous by its absence. NVC oiurces say no decision has been made on its future. I don't think it has a future, it's as simple as that.
NBC ran the show in all kinds of days and times to try to build up an audience. It didn't work. Viewers simply were not interested
Another show "disappearing" is low rated Community --but here NBC assures us it is merely being benched.
30 Rock is coming back plus a new comedy based on the exploits of Chelsea Handler.
Starting Jan. 12 a TV version of John Grisham's The Firm replaces Prime Suspect Thursdays at 10.
Harry's Law is getting relocated to Sundays but not until March.
And I know everybody is really excited Celebrity Apprentice is returning Sun. Feb. 12 at 9 p.m.
And NBC says two reality series --Who Do You Think you are? and Project Runaway are also debuting in the New Year.
NBC had been highly touting a new drama series Awake but I don't see it anywhere on the schedule so far.
CBS which has a vast array of hits is replacing Rules Of Engagement (which goes on hiatus) with a new Rob Schneider comedy called imaginatively Rob.
Got all that?
Posted by james bawden at 12:23 AM