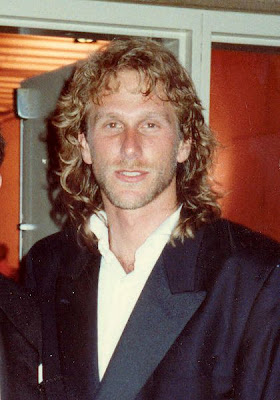 It was a bitterly hot July morning, July, 1987, as I tiptoed out of the boring TV critics tour at the Radisson Universal hotel and ordered a taxi driver to get me to MTM Studios in Studio City.
I couldn't take any more of those mass interviews at the Radisson.
I had to be where the action was --I wanted to be the first TV critic to get on the set of the incoming series thirtysomething which although a MGM TV production was shooting on the MTM lot.
And so within half an hour I was in the offices of the executive producers, Ed Zwick and Marshall Herskovitz chatting up the two hottest producers of the moment.
This was the same studio block where I'd hung out with the Hill Street Blues gang and next door were the old offices of Lou Grant.
I could also spot the corner office of Grant Tinker, founding father of this sprawling empire --later the whole lot was sold off to CBS.
The last time I ventured onto this lot was to visit the stars and producers of Steven Bocho's lamentably short lived series &*&*&*&*&
That day in 1987 I made two new best friends, collaborators Zwick and Herskovitz.
They were yuppies in real life and that's what they wrote about and dramatized.
Herskovitz would sooner talk about the Old English courses he took in university than his show but he was and is an awfully nice guy. And I still say his unjustly neglected 1987 film Dangerous Beauty should be savoured by those who like the Renaissance.
Zwick was smaller, funnier and has amassed an envious ouput of movie hits of his own: Glory, Legends Of The Fall, The Last Samurai, Defiance.
Thirtysomething was a real turning point for network TV. Really, it was about nothing.It concerned the minutae of life.
Ken Olin and Mel Harris played newleyweds Michael and Hope Steadman.
Their best buds were single classics prof Gary Shepherd (Peter Hutton), single Ellen (Polly Draper) and another yuppie couple Elliot and Nancy Weston (Timothy Busfield and Patricia Wettig).
Was this TV's first depicition of a dysfunctional family?
Now that I'm watching the recently released DVD of Season One, I'm really wondering.
Due to legal sparing it has taken years to get this one out to DVD. A similar fate tied up another Zwick-Herskovitz hit My So-CValled Life for years.
But as I'm enjoying Thirtysomething I'm also realizing how on TV imitation is the highest form of flattery. These days such "family" series as Brothers And Sisters owe a lot to the tone and texture of Thirtysomething. And maybe that's why the first season seems just a little less fresh than I remembered it.
Days after my trip I sat at an official ABC dinner with cast and critics. Horton nervously was at my table and took a lot of critical bantering from reviewers.
Anyone over 50 seemed to positively hate the whole thing --that collective emnity made the show a hit. Viewers simply had to see what all the shouting was about.
At one point Horton passed on the main course muttering "I never eat red meat."
"You wouldn't!" glowered a critic, red faced from too much wine.
Later on another scribe only entreated Horton: "Couldn't you be a little more like Fred MacMurray in My Three Sons?" But Horton couldn't and wouldn't.
But the TV careers of Zwick and Herskovitz were made by Thirtysomething which ran four seasons and 95 episodes.
Next up was My So Called Life which ran one season only (1994-95) but shot its teen star Claire Danes into the spotlight.
The next one, Relativity, didn't even finish the 1995 season: it ran 17 episodes on ABC and just disappeared.
Then came Once And Again which had a 48-episode run in three seasons (1999-2002).
And there I was again tiptoeing out of another TV critics gang banger and onto the set to hang out with the guys as well as series star Sela Ward.
But I do recall asking Hershkovitz "This is really Fortysomething, isn't it?' And he nodded "yes".
I've never seen their next opus Quarterlife which ran on the web and managed two episodes on NBC.
And what about the other stars?
Ken Olin,29 when Thirtysomething started, is a bit stout at 55 but can still be seen on Brothers And Sisters which he also executive produces. Wife Patty Wettig is now 57 and also on Brothers And Sisters as the perennial bad girl.
I caught up with Peter Horton when he was directing episodes of the Toronto made series Class Of '96. And I interviewed him again when he co-starred in The Gena Davis Show (2000) --his first acting job before a live audience.
Timothy Busfield has recently been on Entourage and co-starred on Studio 60 On the Sunset Strip (2006-07) and directs episodic TV.
Melody Mayron who played Melissa has been active as a director while Pat Kalember who was Susannah was on was in the short lived Toronto medical series Kay O'Brien opposite Jan Rubes and also in the more successful Sisters (1991-96).
And for a time Thirtysomething had Paul Haggis as one of the writers --he later wrote and produced superb but short lived EZ Streets (1992) which lasted nine episodes on CBS but starred --you guessed it --Ken Olin.
So let's welcome Thirtysomething to the wonderful world of DVD.
And ask how much longer it will take to clear the music rights so we can finally buy The Wonder Years on DVD?
PICTURED:PETER HORTON IN 1988.
Posted by james bawden at 9:51 PM