Secrets From The Ice Proves Of Things Still Thriving 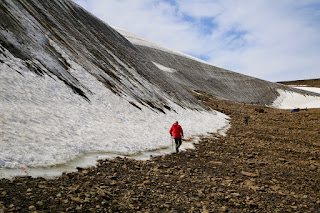 I well remember a conversation not so long ago when a head CBC programmer mused about canceling The Nature Of Things after its 50th season on air.
Well, that programmer has long departed while NOT is enjoying one of its best ever seasons ever.
And if you don't believe me tune in Sunday night at 8 for Secrets From The Ice.
The key player here is an indigenous hunter almost 500 years old who was trapped in the Yukon ice for five centuries.
Only with climate change was his hunter discovered and tests of his DNA indicate he was related to at least 15 ancestors living today.
Producer Andrew Gregg says in an interview he's been fascinated by the North since he first visited  in 1983 --in March 1986 he moved to Whitehorse as a photographer for the Whitehouse Star and then became a producer with Northern Native Broadcasting Yukon.
I remember his more recent documentary on finding ships of the lost Franklin expedition.
In his latest production Gregg also went to Lillehammer, Norway where climate change has resulted in finds of the Viking civilization.
"Both societies hunter reindeer or caribou--Viking sold meat to other European peoples as well."
Gregg is such an accomplished filmmaker he can make the discovery of an arrowhead exciting.
And as he points out  it was special for the indigenous inhabitants of the area --they are discovering they are part of a complex society that was relevant then as today.
So is this the plus side of climate change?
Gregg suspects there are other secrets out there waiting to be discovered.
These artifacts lie in the ice patches of the Yukon mountains --and not the moving glaciers. What are emerging are ancient tools used by hunters --they emerge from the melting ice in pristine shape.
The ancient hand-tooled weapons would have eroded away decades ago but the ice has perfectly preserved them for modern generations.
Gregg might agree with me that the Yukon was hardly a "hot" spot for archeology but now that situation seems completely reversed.
I ask him if the conditions are the same in Norway? What about the mountains of Siberia --another potential site in the future.
With the hunter lost for 500 years and now found one wonders why was he traveling there --was he injured or did the elements get him? It's an historical puzzle that completely fascinates.
For First Nation observers of today he became a cherished ancestor and even got a name: Kwaday Dan Ts'inchi or Long Ago Man Found.
A link to the past has finally come home. Gregg directed, wrote and produced this  great historical puzzle for 90th Parallel Productions.
SECRETS FROM THE ICE PREMIERES ON CBC-TV'S THE NATURE OF THINGS SUNDAY NOVEMBER 19 AT 8 P.M.