Truth Reigns In My First 150 Days 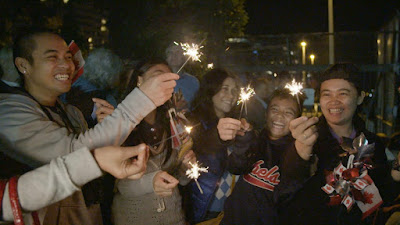 The shock of the truth.
It's all there in the brilliant new documentary My First 150 Days  premiering on TVOntario Wednesday April 12 at 9 p.m.
Because "Reality TV" these days is all the rage but it's actually Un-Reality TV where forced situations and staged moments predominate.
Not so with My First 150 Days which documents the highs and lows of a new family arriving at Pearson Airport to lives they never quite anticipated.
The 58-minute documentary was commissioned by TVO to mark Canada's 150th year as a nation and looks at the cultural adjustments made by a family struggling to learn new ways in a new land.
Producers Stuart Henderson and Romilla Karnick chose the family, explains director Diana Dai, before she was selected to direct.
I ask if the film was being commissioned today would it have focused on Syrian immigrants?
"No!" says Dai  on the phone. "Because it is not about refugees but the larger world of immigrants. No doubt I was asked to direct because I, too, am an immigrant. We connected when I met them at the airport. I knew what they were going through, I surely did."
Dai's accomplished group profile is filled with small moments of recognition not melodramatic staged events.
"Of course I didn't know what we all were getting into," she explains. "It was after all a film about them and not me."
"I filmed about every five days. It was very early into this when I learned the children of the mother, Melona who was already in Canada were having great difficulties. They finally said they did not want to be filmed anymore."
Canada just wasn't what they thought it would be. They'd journeyed from rural Philippines to an urban Canadian environment. They scarcely knew their mother who had preceded them eight years earlier.
Dai expertly captures these tension filled encounters as the newcomers seriously think of returning to a more leisurely lifestyle in their native country.
"I could understand all those conflicting emotions,"Dai  admits."I was born in China, took my M.A. in film at Leeds University in England and later emigrated to Canada. I knew how difficult the adjustment process could be. In their cases they were unskilled, that meant very tough jobs and long hours.
"What we are showing is the initial cultural shock which can last for many months. Some newcomers decide it is not worthwhile and want to return home to a land where they feel safe."
Dai is such an accomplished film maker that the family seem unaware of the cameras most of the time. The newcomers emerge as caring, feeling people without the usual cultural cliches.
Dai makes us feel for these people and we become interested in their struggles. It turns into an emotional roller coaster ride for viewers as well.
The production was shot between January and July 2016 but Dai notes "It is a difficult adjustment for everybody going to a new country"--she remembers meeting an Indian-born cabbie at Pearson who had university degrees and expected something better as an immigrant.
But how has the family fared since Dai stopped filming?
"I keep in touch. I still care. They are doing better. They are getting to know each other again. It's a long climb. My heart goes out to them. Their struggles are the struggles of all newcomers."
The film will be shown at a later date on CBC Documentary channel.
MY FIRST 150 DAYS PREMIERES ON TVONTARIO WEDNESDAY APRIL 12 AT 9 P.M.
MY RATING: ****.