Secrets Of Survival Among the Year's Best 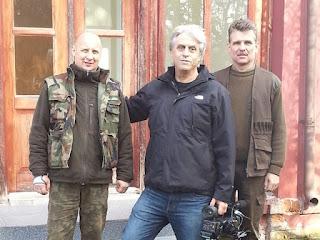 I wonder if Malka Rosenbaum and Juergen Ulloth have ever met?
Because they are the dual subjects of one of the best Canadian documentaries I've seen in years: Secrets Of Survival.
Malka was a student at the University of Toronto when she told her mother about the difficulties of being an only child.
And her mother then told her that she had an older sister who had been given to Polish neighbors during the height of the Holocaust.
Juergen Ullroth found out about his past when he went to the Kassel Municipality in west Germany to retrieve his birth certificate for his marriage license.
And the municipal clerk told a shocked young Juergen that his family name was actually Raenold, his mother's maiden name.
Juergen's mother had married Mr. Ullroth in 1951 four years after his birth.
"And that was the beginning of this dual profile," says veteran film masker Martin Himel on the line from Tel Aviv.
You can check out Secrets Of Survival for yourself --it premieres on the CBC Documentary Channel Sunday April 9 at 9 p.m.
"Originally I chose three subjects," Himel tells me. "But the first two worked out so well I could drop the third."
"Both Malka and Juergen were affected by World War II more than they had ever imagined. And our search for closure for these two extraordinary people turned out so much better than I had ever imagined."
Himel's odyssey took him and his two subjects "all over the place. On several continents.  Part of it depended on good luck, part on the dogged research of people who cared about this theme.It turned out better than I could ever have hoped for."
In Juergen's case Himel and his camera crew follow the resolute German right across the Atlantic where he learns his father was an 18-year old American soldier who very much wanted to marry his 16-year old German girlfriend.
"Juergen told me he didn't think his mother would ever consent to be on camera but just before we were preparing to leave he phoned and said she was ready. First surprise was how well she speaks English. But she also gives us the perspective of a scared teenager --Americans in 1946 were still very much considered to be the enemy."
The scenes of Juergen slowly researching his ancestry in America constitute highs and lows. His father Malcolm continued to visit until Juergen was three and then left forever.
Juergen's voyage of discovery takes him to relatives in North Carolina he never knew existed and one scene finds him in an evangelical church embraced by parishioners.
" An uptight European man suddenly found what it is to be treated as an American," laughs Hiimel.
Forty-five years after hearing of her sister's existence Malka is stunned to learn from an aged aunt that her sibling might indeed have survived the war.
Using extraordinary detection a young researcher in Poland is able to track down some valuable information about the sister.  Malka and her family visit the isolated farm deep in the Polish woods where the baby was secreted.
And what they discover is heart warming and heart breaking --you'll have to watch the entire film to learn more.
Himel says agrees these are only two of thousands of unresolved family secrets --a war that ended 72 years ago still reverberates.
"In both cases the survivors merely wanted to go on with their lives as best as they could," he tells me. "All became victims in some way or another. Juergen and Malka are more closely related than they could ever know."
SECRETS OF SURVIVAL PREMIERES ON CBC DOCUMENTARY CHANNEL SUNDAY APRIL 9 AT 9 P.M.
MY RATING: ****.