The Brain's Way Of Healing: TV For The Mind 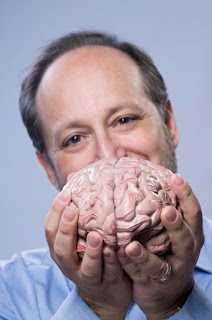 It's becoming increasingly difficult to find a TV documentary as challenging as The Brain's Way Of Healing.
This hourlong edition of The Nature Of Things premieres Thursday night at 8 on CBC.
As TV networks multiply and fight for ratings dominance any program that  assumes viewers are intelligent and demanding becomes ever more of a rarity.
The Brain's Way Of Healing is the third documentary made by veteran director Andrew Gregg and Dr. Norman Doidge (for 90th Parallel Productions) and may well be the best so far.
Using cases from his book of the same title Dr. Doidge visits with people who have battled various brain ailments to make remarkable progress.
When I chatted on the phone with Dr. Doidge I remarked how relaxed his subjects seemed and how confident they seemed in describing their conditions.
"I've been listening to people for a long time," Dr. Doidge laughed.  And having known and worked with these people for his book was undoubtedly a huge plus.
"Plus they wanted to talk about the journeys they had made. That was very important to them."
In today's TV world an hour documentary only runs 42 minutes. And yet this "hour" doesn't seem at all rushed.
I have an idea it may even make viewers want to read the book to get a longer version of the stories told here.
Of course one of the requisites of a TV documentary is suitable visuals. And this one is not a succession of talking heads.
"I went to South Africa to interview John," Dr. Doidge reports. "But it was also to see the penguins."
John is a feisty senior fighting back from Parkinson's and we see the unique way he is using his brain to exercise in a full way and avoid the shuffling gait of many Parkinson's patients.
And one of the delightful shots shows him down at the beach walking sturdily among a flock of surprised penguins. Really, it's the perfect visual for his robust personality of fighting back.
Archival footage was needed to demonstrate the plight of John who is seen as an autistic child in terrible screaming pain.
You'd never guess this is the same Jordan as we see today, a youth with a wry comedy sense and one who is so relaxed and open.
We also meet Gabrielle whose tumor required surgery that damaged her brain and how non-invasive treatments of light have so very much improved her condition.
And there's Elizabeth who was born missing a third of her cerebellum.
Archival footage shows how as a baby she was challenged  and helped immeasurably by invasive treatments of sound and exercise.
Dr. Doidge is a sympathetic interviewer with the ability to draw these people out and encourage them to tell their amazing stories.
And that is what great TV is all about --the ability to personalize such stories so we can relate and be educated at the same time.
And having veteran filmmaker Andrew Gregg onboard is an immense help --this the third collaboration between Doidge and Gregg so far.
The Brain's Way Of Healing is so well put together I'd even like to see the longer version which certainly deserves a theatrical release.
THE BRAIN'S WAY OF HEALING PREMIERES ON THE NATURE OF THINGS ON CBC-TV THURSDAY OCTOBER 27 AT 8 P.M.
'MY RATING: ****.