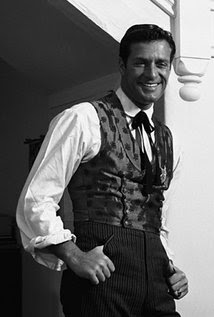 Hugh O' Brian died at his Beverly Hills home on September 5 2016 aged 91 --I guess he was most famous as TV's Wyatt Earp.
But when I interviewed him in his Toronto hotel suite in 1972 he was tub thumping for a new series Search which only lasted two seasons (it also ran on CTV)..
I found O'Brian to be warm and ingratiating as he welcomed me and fellow TV critic Jack Miller (who I had just replaced at The Hamilton Spectator).
"Wyatt Earp is my signature, always will be and I'm at ease with that," he laughed. "Better to be associated with a quality series than something like Charlie's Angels I guess."
O'Brian was familiar already with Toronto because "I was born in Rochester in 1925. My real name is Hugh Krampe and after the war I decided to try acting. Instead of going to Yale as my mother wanted I headed for L.A. and made my debut in a stage production of Somerset Maugham's Home And The Beauty --that was in 1947 Ida told me to chose a new name and I picked O'Brian which was my mother's maiden name.
"My first picture came in 1948 in a bit in Kidnapped and then Ida gave me some speaking lines in the 1949 movie Never Fear. Then I was one of the juvenile leads aged 25 iun the sci fi flicxk Rocjetship X-M."
Lupino told him he needed a lot of seasoning and he joined Universal International as a contract player.
"I was a male ingenue. Took any part offered by the studio. The other unknown male starlets were Rock Judson, Tony Curtis, George Nader and Jeff Chandler. Female starlets included Piper Laurie, Julia Adams and Amanda Blake who later co-starred on TV's Gunsmoke as Miss Kitty."
I told O'Brian I had not seen many of these movies.
"What!" he joked. "You haven't seen Son Of Ali Baba (1952)? Or Back To God's Country (1953)?  Or  The Twinkle In God's Eye? (1955)?"
He also did a lot of TV.
"It paid the bills. I was on Loretta Young, Climax. The Millionaire, Make Room For Daddy. I never turned down an assignment. I was unknown and needed all the exposure I could get."
In 1955 O'Brian signed for the TV series The LIfe And Legend Of Wyatt Earp for a total of 227 episodes.
"We simply ran out of stories to tell. Everybody was watching westerns in those days. We had to bid competitively for the horses, the wagons and hire our own designer to make the period costumes. After six years I was simply pooped."
O'Brian returned twice to the character in  the 1991 TV flick The Gambler Returns with Kenny Rogers and the 1994 TV flick Wyatt Earp: Return To Tombstone.
O'Brian then jumped into movies  but this time as star.
"I loathed working with Lana Turner (in 1963's Love Has Many Faces).  But Ten Little Indians (1965) was a superb version of the Agatha Christie thriller. I made The Shootist (1976) with Duke Wayne in his last movie and he was every bit the superstar."
O'Brian was noted for his philanthropy. He told me it started when he visited Dr. Albert Schweitzer at his clinic in Africa in 1959.
"I had already founded the Hugh O'Brian Youth leadership program to develop future leaders and it continues to thrive to this day.
On one point O'Brian was adamant.
"I will never marry. I don't want to wind up with five ex-wives and buckets of alimony."
But O'Brian did marry his longtime companion Virginia Bareger in June 2006 at the age of 2006 --he was then a hearty 91 --and he lived another decade!
I talked to him on the phone several times over the years and he remembered me and said "I'm grateful to this business. It gave me all that I have these days."