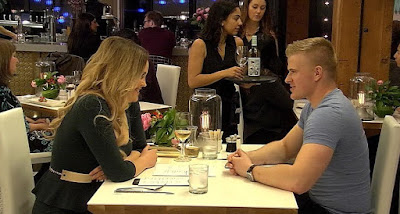 So there I was at a very swank dinner party and as usual I was lamenting the lack of Canadian series on Canadian TV channels.
"I watch First Dates all the time," said the woman opposite me, dressed in her chic Chanel pantsuit and a very famous author indeed.
I'd heard of that one but was playing catch up.
But now I've just watched the two specials First Dates has reconfigured from past episodes titled tantalizingly enough Worst Dates.
Check them out for yourself on Sat. Feb. 13 at 5 p.m. and on Sun. Feb. 14 at noon and again at 5 p.m. on Slice, Got that?
And I'm finding this series very cute but also a bit cringe worthy at times as very nice couples find they are not suited for each other and in Blythe Dannerese decide to consciously uncouple.
The setting is the very swank "in" Vancouver restaurant Earls Yaletown in the trendiest section of Vancouver.
I'm told producer Toby Dormer stations dozens of hidden cameras all over the place to capture every moment.
I'm told hundreds of Vancouverites were set up this way and none of them had any idea who they were meeting. Talk about blind dating gone wild.
Now a neighbor who is hooked on the show explained that nothing ever seems rehearsed at all. Some of the contestants are gorgeous, others less so.
In short this isn't your average cookie cutter reality outing where the desire is to embarrass the heck out everyone into multiple accusations.
I really liked the atmosphere and how eager to please everyone seems.
In fact several subjects say they have been here before and were found wanting by other blind dates.
It's the complete lack of rehearsal that makes each encounter both touching and rather sweet.
A whole heck of a lot of footage must have been shot just to get those brief moments of self realization.
the way almost all seem awkward at first is perfectly realized.
And they all seem genuinely inclined to ask good questions and try to make their partner feel at home.
Of course this turns viewers into mini-voyeurs but in a rather nice way.
Very quickly we can see there's a complete lack of chemistry in some couples while others are cautiously optimistic some genuine emotion can be discovered.
I would think most had a very interesting time. But a few seem genuinely crushed when rejected.
When it comes time to plan future dates some of the curt refusals just stunned me.
I couldn't help myself but I most identified with the exterminator who so desperately desired a relationship in his thirties.
But others who've seen more episodes identified with others.
And one constant fan told of the desperate gal who even tried to pick up the bartender.
Worst Dates is the best --or make it the best of the worst--of these encounters, a serio-comic salute to Valentines Day.
WORST OF THE FIRST FIREST DATES PREMIERES ON SLICE SATURDAY FEBRUARY 13 AT 5 P.M. AND AGAIN AT 9 P.M. ON SUNDAY FEBRUARY 14 IT RUNS AT 1 P.M. AND 5 P.M.
MY RATING: ***.