Lowdown Tracks: The Art Of The TV Documentary 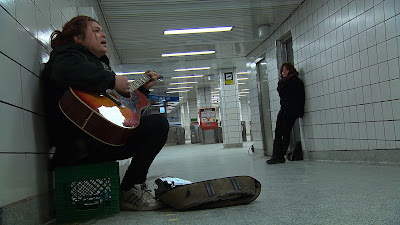 Just when it seemed the Canadian TV documentary had seen better days along comes Shelley Saywell's positively brilliant new group profile Lowdown Tracks.
Watch it Saturday night November 14 at 9 on TVOntario to see if you agree with me.
Saywell examines the lives of five buskers in the Toronto subway who join together with Lorraine Segato to make great music.
"It seems we were filming forever," laughs veteran producer-director Shelley Saywell. "But we really started in August 2013 --it certainly was over two very brutal winters and we were out there with our subjects for all that."
"It all started when I was at one of Lorraine Segato's concerts with some of these street musicians. And I joked to her I should have brought my camera because this was a pretty important story."
For some time Saywell had noticed the large number of homeless in a city as affluent as Toronto. But how to tell their story in a way that would not demean them --that was the challenge.
"I chose five buskers. They tell their stories through their songs. And all are enormously talented."
Saywell says it was "relatively easy" filming their acts --some hesitated balked at telling their stories which are often filled with great pain.attributes.
"I started with more studies but some dropped out. At times I'd stop filming if it got too personal.
Their shockingly low standards are exemplified by the man who sleeps rolled up under a picnic table in a park --in the middle of winter.
Another participant shows the hole in the wall where she made her life until authorities chained it off.
Another guy shows the reality of sleeping in a shelter --the men are roused at 6 a.m. to fend for themselves out on the street no matter how cold it is out there.
"All of them have similar backgrounds," Saywell says. She's referring to positively brutal childhoods which often involved sexual abuse.
How they coped was to withdraw into themselves. They became needy adults who often could not cope with normal society.
Says Saywell: "They all talked. They knew what we wanted. And they are very self aware, that's the point.":
They had withdrawn into themselves using their music as mission statements.
Saywell films them everywhere.
There's the guy putting up his tent in the wooded area of a Toronto park.
There's another who tells her "I've been talking to the dead since I was a child."
Chances are you've brushed by some of them as they sang in the subway.
The way social workers tend to marginalize them is another shocker but Saywell says "With budget cuts the case loads are huge. "
If most seem to have some form of PTSD (Post-Traumatic Stress Disorder) so what? Their humanity shines forth and we get to know them and their peculiar situations.
Saywell who also wrote the script has masterfully jumped back and forth from the subjects and finds common threads. The images often sum up what we're thinking, wondering about them.
In short here is a great group profile and I'm sure you'll pause the next time you meet one of them in the subway.
So the art of the TV documentary is alive and kicking in Lowdown Tracks.
LOWDOWN TRACKS PREMIERES ON TVONTARIO SATURDAY NOVEMBER 14 AT 9 P.M.
WITH REPEATS SUNDAY NOVEMBER 15 AT 10 P.M. AND TUESDAY NOVEMBER 17 AT 1 A.M.
MY RATING: ****.